A wide variety of new yuletide music for your Christmas stocking.
Ted Olsen|December 13, 2011

Like CCM, Christmas music is defined by its lyrical content, not its music (though sleigh bells, chimes, and children's choruses seem to be in every Christmas album from reggae to bluegrass). So, like CCM, it has spun off dozens of subgenres.

On one end of the spectrum are "seasonal" albums that make no reference to the birthday boy. That's expected from avant-garde jazz musician John Zorn's A Dreamers Christmas [3 stars] since he usually makes "radical Jewish music." It's unsurprising on A Very She & Him Christmas [3 stars], a collection of standards from the M. Ward/Zooey Deschanel act that plays its '60s nostalgia pretty straight. Jack Johnson's indie compilation This Warm December Vol. 2 is has many strong original pieces [3 stars], but doesn't have the nods to transcendence that 2008's Vol. 1 had.

On the other end of the spectrum, by my count, worship albums outnumbered every other Christmas subgenre in 2011. Is it a reflection of the boom in worship music or an accurate reflection of how much of the Christmas story is worship (angels, shepherds, magi)? Many of these albums are simply carols played live, as it the case with Christmas from the Vineyard [2 stars] or, remarkably, half of David Crowder Band's Oh for Joy [3 stars] the band's least creative effort to date (though, being Crowder, it's still very good).

From the Belly of a Woman [4 stars], from the Seattle postrock/ambient group The Opiate Mass, is a live worship recording, too, but unlike any other Christmas album except 2009's "Salvation Is Created" from Bifrost Arts. It's not festive. This is not an album you'd put on in the background while hanging ornaments; it focuses ... 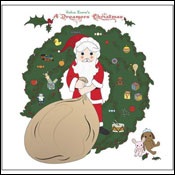