Spielberg's latest is a rousing, inspiring tale of a horse and his boy in World War I.
Brett McCracken|December 23, 2011
Our Rating

Very few filmmakers could get away with making a film like War Horse—a film with the scope and sincerity of 50s-era Hollywood with the pacing and unconventional structure of a European art film. Only a powerhouse in the Ford/Capra mold like Steven Spielberg could pull it off, and he nearly does with this effort. War Horse is a beautiful, daring, old-school family friendly film about a boy, a horse, a family, and a war.

Spielberg's first cinematic foray into World War I, War Horse is based on a 1982 children's novel by Michael Morpurgo about a boy whose beloved horse is sold to the British cavalry and sent off to fight in France. Though not really a "war film" in the Saving Private Ryan sense, War Horse is nevertheless a film very much about the tragedies of the Great War—the trenches, the mustard gas, the brutality of modern technology laying waste to the pastoral ideal—albeit centered upon the narrative arc of a horse. 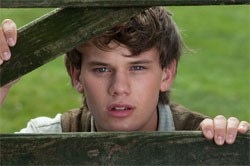 The film opens on a rural farm in Devon, England, after farmer Ted Narracott (Peter Mullan) buys a horse at auction to help till the rock-strewn fields of his family's farm. His son Albert (newcomer Jeremy Irvin) immediately bonds with the horse, naming him Joey and training him to pull the plow. Aside from some father/son disagreements and a minor conflict with a landowner villain (David Thewlis) threatening to seize the farm if they can't pay rent, the first third of the film is a idyllic pastoral experience: lush green hills, a horse that can (almost) outrun newfangled automobiles, and the lovely Emily Watson as a cheerful British mum.

But then war comes. Most of the local boys enlist in the army but Albert is too young. Hard up for cash, Albert's father sells Joey to the British cavalry, and Albert must tearfully say goodbye to his four-legged friend. As schmaltzy and wide-eyed innocent as this (somewhat overlong) prologue seems, it serves an important contextual purpose. For the story of WWI is very much a story of transitions—from the pastoral and agrarian past to the technological and modernist future. It was the last war where horses and tanks both played critical roles, and in vividly portraying the transition from romantic agrarian vistas to the horrific muddy trenches and barbed wire of No Man's Land, Spielberg makes the most of the striking juxtaposition. 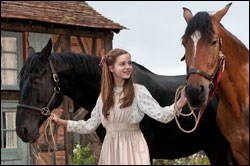 Where the beginning of the film focuses on the Narracott family, the latter two-thirds focuses primarily on Joey the horse, as we follow his unlikely journey of survival in the war. Joey outlives many riders and finds himself fighting on both the British and German front lines. In episodic fashion we watch as Joey charms a pair of young German deserters, gets worked to near death by a cruel horsemaster, and finds brief respite with a young girl and her kind French grandfather (Niels Arestrup), who provides some of the film's most poignant lines. As scores of humans die in all sorts of horrible ways all around him, Joey fights on, his survival driven by natural instincts rather than partisan nationalism. 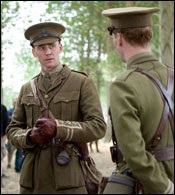 It's a definite risk to make a film with such unconventional structure, where the only constant is a horse who doesn't talk, but Spielberg doesn't necessarily want us to relate to Joey as we would a human protagonist as much as to see the absurdity of war through the eyes of an impartial player who, conveniently, experiences the war from nearly every possible angle. In this way the horse protagonist is a smart move, though non-horselover viewers will likely long for a bit more of Albert and his family. After all, we spent the first part of the movie learning to care about them. Predictably the film does come back around to the Narracott family as the horse and his boy reunite, but some will complain that this is either too convenient or too abrupt.

Cynics will loathe War Horse for its insistence on earnest, Disney-fied idealism. After all, there were few happy endings in World War I, a devastating conflict that wiped out 35 million Europeans and forever changed the landscape of the West. WWI is Siegfied Sassoon and Wilfred Owen poetry; T.S. Eliot's "The Waste Land"; F. Scott Fitzgerald, Hemingway and the "Lost Generation." It is not happy horses and the happy boys who love them.

And yet the sincere hope of War Horse, in the heart-warming hands of Steven "E.T." Spielberg and with the soaring melodies of a John William score, feels necessary rather than indulgent. With every swooping crane shot from cinematographer Janusz Kaminski, and with every inspiring gallop of Joey through the hopeless mire of body-strewn No Man's Land, we are reminded why cinema matters in hard times. It inspires. It offers us visceral symbols of hope and compelling stories of redemption.

The war action is astonishing

War Horse may falter here and there, and its momentum doesn't really pick up until halfway through (the battle scenes are exceptional), but its stride is strong and its vision uncompromising. This is a brave, unapologetic film, determined to tell Joey's story fully—and in the process tell us something about what it means to survive in a world of peril. We must run the race, focusing on the goal without being undone by every obstacle in our path. We must endure the hard times if we aspire to a place of peace. Sometimes it's about just taking it one step at a time. Sometimes it's about relying on the grace of others, as in a scene when Joey—tangled up in barbed wire—must rely on a German and English soldier working together to free him. Sometimes it's just a matter of luck. However it happens, survival in the midst of carnage is possible, says War Horse, and even the darkest hours can be lit by a spark of hope.

War Horse is rated PG-13 for intense sequences of war violence. Aside from some intense war violence, which includes characters being shot and stabbed by bayonets, War Horse is squeaky clean and appropriate for families with older children. The war scenes are intense and several fairly big characters do get killed, including many horses. But on the whole it is a great, inspiring holiday film for families to enjoy together.