Shades of Twilight Zone and Left Behind can't overcome this film's problems.
Russ Breimeier|February 18, 2011
Our Rating

One fateful day in Detroit, a news reporter named Luke (Hayden Christensen) awakens in an empty apartment. His girlfriend is missing and the power is out. Things become more disquieting when he reaches the lobby, piles of clothing and personal belongings the only mysterious evidence of people's existence. Things are just as desolate in the city street, where empty cars are strewn about in chaos after driverless accidents. Moments later, a jetliner interrupts the quiet, dropping from the sky just miles away.

The Rapture? If only.

Vanishing on 7th Street begins with a premise all too reminiscent of the first Left Behind book or Stephen King's The Langoliers. It prepares us for an intriguing movie steeped in mystery, creepy ambience, and deep moralizing among the characters about what they think is happening, all befitting of classic Twilight Zone or an M. Night Shyamalan movie. But Vanishing ultimately proves a hollow and frustrating experience—it's all setup with no payoff.

Luke's introduction would have made a stronger opening to the film. The same might be said of Rosemary (Thandie Newton), a physical therapist working at the hospital when the lights go out and all hell breaks loose—her 9-month-old baby is missing, along with everyone else. Instead, things begin awkwardly in a movie theater with film projectionist Paul (John Leguizamo). Maybe the idea was to spook out the Vanishing filmgoers, but clunky dialogue and stilted acting keep the scene from working like it should, while revealing too much too soon.

Regardless, these three characters are eventually drawn to a bar on 7th Street—one of the few places left with working power thanks to a gas-powered generator—where they find 12-year-old James (Jacob ... 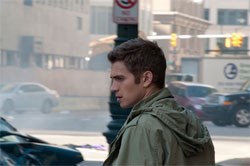