The music is drowned out by a too-loud message about the dangers of fame.
Brett McCracken|January 7, 2011
Our Rating

Having the misfortune of coming on the heels of high-achieving, superbly acted films like Walk the Line and Crazy Heart, a country music-themed film like Country Strong has little chance of winning many fans. In spite of its title, this is a pretty weak film.

Borrowing the washed-up/alcoholic/formerly superstar comeback story of Crazy Heart, Country Strong tells the story of Kelly Canter (Gwyneth Paltrow), a Shania Twain-caliber country diva with a drinking problem. After a concert meltdown, in which a drunken fall off the stage resulted in the loss of the baby she was carrying, Canter does a stint in rehab. After rehab, she and husband/manager, James (Tim McGraw), embark on a comeback tour to reestablish her cred. For the tour's opening acts, James recruits two fresh-faced young talents whom he plans to groom into the next big things: Chiles Stanton (Leighton Meester), a pop-tart beauty queen with a sweet naiveté, and Beau Hutton (Garrett Hedlund), heartthrob cowboy content to play honky tonks and sing love songs outside the limelight.

Most of the film consists of the assorted soap opera antics of the ensuing tour: Various parties sleeping with one another, marriages suffering, young love developing, Kelly relapsing and ruining yet another concert with a meltdown. It's chaos. Intermittently, we get quaint original songs performed by the three leading actors (using their own voices), serviceable each, if not on par with the Joaquin Phoenix-as-Johnny Cash standard.

It's odd that in a film about country music, the one lead actor who doesn't sing at all is the one with legitimate Nashville chops: Tim McGraw. He plays a dour, slightly sleazy but good-natured businessman instead. For her part, Paltrow pulls off the diva roll ... 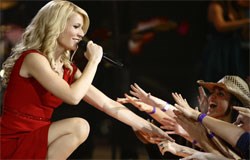