With 'The Rite' opening Friday, we look at how Hollywood has depicted exorcism over the years.
Steven D. GreydanusJanuary 26, 2011

The new supernatural horror flick The Rite, opening Friday and starring Anthony Hopkins, is the latest in a long line of Hollywood films in the subgenre inaugurated by William Friedkin's 1973 landmark film The Exorcist. Movies had explored exorcism before 1973, but Friedkin's film spotlighted the phenomenon in an unprecedented way.

The Exorcist represents a pivotal link between the Catholic-inflected piety of Golden Age Hollywood and the demonic world of latter-day horror. It is also the source of much of our culture's awareness of and ideas about possession and exorcism. Real exorcisms in both Catholic and Protestant milieus proliferated in the film's wake, and its impact continues to be felt in recent films.

The form of exorcism used in The Exorcist is from the Roman Ritual of 1614, which remained unchanged until updates in 1999 and 2004. The film's depiction of the rite and phenomenon of possession, though sensationalized, is fairly authentic. Notable elements include the demon's resistance to exorcism and other ambiguities. For example, the victim writhes in pain when a priest sprinkles her with water—though it is not blessed holy water. Placebo effect? Or is the demon deliberately casting doubt on the reality of the possession, the effectiveness of the church's arsenal, or both?

Casting out demons goes back to the ministry of Jesus, and in cinema, back to the silent era. The 1912 film From the Manger to the Cross depicts Jesus healing a demoniac. Cecil B. DeMille's silent The King of Kings (1927) opens with Jesus dramatically delivering Mary Magdalene of seven demons.

Although the Devil and satanic cults surfaced in films prior to The Exorcist, possession and efforts to cast out demons were rare. But by the late 1960s, ... 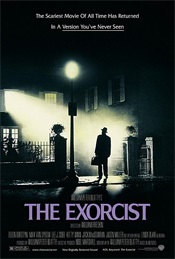