What would you do if you caught your best friend's wife in adultery?
Carolyn ArendsJanuary 14, 2011
Our Rating

Ronny (Vince Vaughn) is facing a dilemma. He's always admired the happy marriage of his best friend and business partner, Nick (Kevin James). Nick and his wife, Geneva (Winona Ryder), are the standard to which Ronny aspires as he considers proposing to his girlfriend Beth (Jennifer Connelly). But he's just inadvertently caught Geneva kissing another man (Channing Tatum). He wants to tell Nick what he's seen immediately, but his friend is so stressed in the wake of a huge professional deadline that Ronny can't quite bring himself to deliver the horrible news. What should he do?

Normally stellar director Ron Howard (Cinderella Man, A Beautiful Mind, Parenthood) spends 150 wildly uneven minutes exploring the answer to that question in a film that ranges from lighthearted bromance to dark psychodrama and never really hits its stride. When Ronny decides to play amateur detective in an effort to both secure evidence of Geneva's infidelity and also to understand where his friends' marriage went wrong, his life begins to quickly unravel. Unfortunately, due to an unfocused and implausible script, so does the movie.

The Dilemma begins with promise. Ronny, Beth, Nick and Geneva are out on a double date, and the two couples are exhibiting the chemistry of old, good friends and bandying about a provocative question: How well can you really know anyone? Besides setting up the film's major theme nicely, the opening frames establish Ronny and Nick's best-buds-since-college bond, evidenced in their goofily synchronized dance moves, secret verbal guy code, and overt I've-got-your-back loyalty. The scene is crisp—funny but nuanced—teasing the viewer with all the potential one would expect from the cast and director. 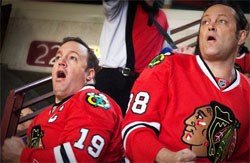 The Dilemma
expand
hide this