Discovering grace, community, and mission around the table
Tim ChesterJune 17, 2011

Consider for a moment what happens at the feeding of the five thousand. God gives out bread. On a massive scale. Or think about the wedding at Cana. Jesus turns perhaps 120-180 gallons of water into wine. Quality wine. At the beginning of the Bible story, the first thing God does for humanity is present us with a menu: "The Lord God planted a garden in Eden, in the east, and there he put the man whom he had formed. And out of the ground the Lord God made to spring up every tree that is pleasant to the sight and good for food" (Gen. 2:8-9). At the end of the Bible story, God sets before us a perpetual feast. God likes doing the catering. He thinks food is a good thing.

God incarnate eats. Jesus would have eaten two meals a day. When he ate with the rich, he might have had white bread, but most of the time he ate the barley bread eaten by the poor, along with cheese, butter, and eggs. Meat and poultry were too expensive to be eaten except on feast days. He may have had fish on the Sabbath. There was of course no tea or coffee. Jesus would have drunk wine, generally mixed with three-parts water. Honey was the primary sweetener, along with figs. Pepper, ginger, and other spices were imported, but were expensive. Such was the diet of God incarnate.

The risen Christ eats. Indeed he makes a point of doing so publicly: "They gave him a piece of broiled fish, and he took it and ate before them" (Luke 24:42-43). Eating in the presence of God is our future. Food will be part of the renewed creation. Food is not left behind with the resurrection. References to a future feast are not just metaphors for an ethereal future existence. Our future is a real feast. 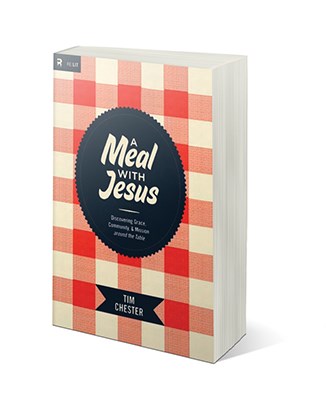