The vehicles go international—with a 007 makeover—in this entertaining but uneven sequel.
Josh Hurst|June 24, 2011
Our Rating

I have a strong suspicion that the Pixar team could have had a real corker on their hands with Cars 2, if only they'd made it … well, without the cars.

Because really, it was the cars themselves that kept the franchise's first film relegated to bottom-tier Pixar status. The easy knock against the first movie is that it's just a cartoon; it's not as conceptually sophisticated as, say, the uncompromising sci-fi vision of Wall*E, or as thematically rich as Up's meditations on marriage. It's really just a Saturday morning cartoon stretched to big-screen proportions—a characteristic shared with only a handful of Pixars (Monsters Inc., A Bug's Life, and now Cars 2).

You can fault it for a lack of ambition if you like, but there's nothing wrong with some good, frivolous cartoon zaniness, especially when it's done as well as Cars. It's good to remember—in an age where Pixar is sometimes criticized for catering more to grown-ups than to children—that they do kid stuff better than anyone. The new model is a brighter, more energetic and colorful movie than the last one—my wife called it Speed Racer meets James Bond—and I suspect it'll go over just fine with the under-12 crowd.

It is also a much more ambitious film. Perhaps John Lasseter—the Pixar boss who is in the director's chair here for the first time since Cars—was a bit shaken by the middling reviews for the first film; or perhaps he just got the creative itch to do something different. Whatever the case, this sequel is, in many ways, an entirely different film than the first. It largely ditches the rustic Americana of the original, as the cars leave Radiator Springs for a whirlwind world tour that finds Lightning McQueen competing ... 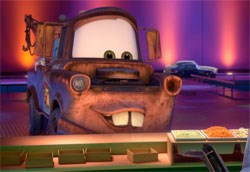