Woody Allen's whimsical valentine to the City of Light may be his most enjoyable film in years.
Steven D. Greydanus|June 24, 2011
Our Rating

Returning from a trip to Paris sometime in the mid-20th century, a federal judge named Frank A. Picard told a friend named Charley Manes, "It was a wonderful trip. Paris is a grand place. But I wish I had made the trip 20 years ago."

"You mean, when Paris was Paris?" Manes asked.

"No," Picard replied, perhaps wistfully. "I mean when Picard was Picard."

When Paris was Paris. When Picard was Picard. Ah, the old days. It seems the present is always overshadowed by a remembrance of lost or faded glory, some golden age before which present realities are poor and unsatisfactory substitutes.

Woody Allen fans know it well. Sure, they'll admit, Allen cranks out a lot of unmemorable and even poor work nowadays—ah, but they remember when Allen was Allen. Every once in a while, perhaps, he comes out with a film that shows them he remembers, too.

Midnight in Paris is such a film. It's a nostalgic movie about nostalgia—nostalgia for when Paris was Paris, for one thing. Even if you've never been to the City of Light, even if phrases like "the Lost Generation" and "la Belle Époque" hold for you none of the magic they do for Allen, the film makes you feel their power for his onscreen alter ego, appealingly played by Owen Wilson. For that matter, even if you aren't an Allen fan—even if you aren't convinced Allen was ever Allen—Midnight in Paris could almost make you nostalgic for the Allen that fans remember, or seem to.

Which Allen, though? There are almost as many Woody Allens as there are Allen films, but Midnight in Paris is a frothy, whimsical confection that harks back to fantasies like The Purple Rose of Cairo and Zelig—but in a sunnier, more relaxed mode, as if even Allen's bleak anxieties soften when ... 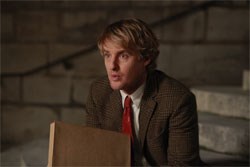