In the opening frames of Mr. Popper's Penguins, we meet young Tom Popper, a boy waiting with unbearable anticipation to connect by short circuit radio with his explorer father. As time passes and the radio calls come farther and farther apart, Tom's admiration for his dad begins to fade into sadness and resentment over his absence.

Flashing thirty years forward to the present day, we meet the adult Tom (Jim Carrey), a successful businessman misapplying the charisma and sense of adventure he inherited from his father to ruthless real estate development. Unlike his dad, Tom stays close to his kids—at least near enough to have them visit his gleaming penthouse apartment on alternate weekends. But his emotionally guarded heart threatens to make him as much of an absentee parent as his own father was.

We've seen this premise before—the likeable dad whose workaholic tendencies and stunted emotional development require a deus ex machina to rescue him (and his family) from himself. In Carrey's own Liar, Liar, the saving grace was the dad's sudden inability to lie. In The Santa Clause, driven toy seller Tim Allen found his heart in a Santa suit. In The Kid, Bruce Willis was all but lost (so much so that he hadn't even managed to start a family) until confronted with his boyhood self.

What will save Mr. Popper? Cue the penguins.

The first bird arrives as an inheritance from Tom's recently deceased father. Soon, Tom finds himself contending with a total of six Gentoo penguins. The creatures wreak plenty of slap-sticky havoc in Tom's previously impeccable Manhattan apartment, but eventually they waddle their way into his affections by helping him reconnect with his kids and ex-wife. There are a multitude of complications, of ... 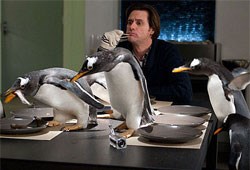