This college football drama about a family's tragic loss is too clunky and melodramatic for its own good.
Russ Breimeier|March 25, 2011
Our Rating

The Abbate family of Marietta, Georgia lost 15-year-old Luke in a tragic car accident on his way home from school in 2006. Later that year, older brother Jon Abbate, a junior at Wake Forest University and a defensive linebacker for the Demon Deacons, received permission to change his jersey number to 5, the same number worn by Luke in high school field hockey. The Abbates also honored Luke by sparking a season-long tradition of holding up five fingers during the 4th quarter of every football game, thus renaming it the 5th quarter. These actions helped inspire the Deacons to their most successful season in the school's history, going 11-2 and winning the conference championship.

Sure sounds like a recipe for a heartfelt and inspiring sports film. If only The 5th Quarter did the story justice. 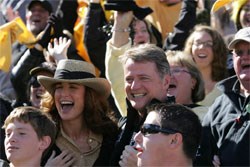 Andie MacDowell and Aidan Quinn as the Abbate parents

First, it's hard to call this a football movie when 30 minutes pass before a football-related scene; the first game doesn't even happen until the film's midpoint. Granted, Luke died several months before football season, but there's probably less than a half hour of total game footage in The 5th Quarter. And footage is the right word; real shots from the games are intercut with new scenes of the actors cheering on the sidelines and in the stands. The results are choppy montages of football with no real semblance of what's happening in the game aside from the occasional touchdown and blocked kick.

More importantly, The 5th Quarter dodges the main point: How did Jon Abbate and his family find hope in tragedy to inspire the Deacons to win football games? Did the team play better in the 4th (5th) quarter because of the outstretched hands of fans? Was their successful run due to what happened on the field or behind the scenes?

It's never made clear. In the film, Coach Grobe (Michael Harding) purposefully avoids answering such questions when talking to the press. Later, before the final game, he refers to the team helping each other through personal problems during the season. That could have made this movie more meaningful, showing how personal tragedy and the inspiration of one can teach a team to bear one another's burdens. But the teammates are rarely on screen, appearing only to deliver clichÉd blather about winning instead of losing. 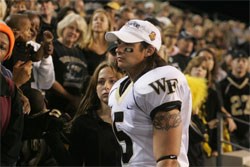 The focus instead is on the Abbate family coping with the loss of their son. This also might have yielded an emotional yet effective film, demonstrating how we all deal with grief and find comfort in different ways. Instead it's a series of drippy vignettes that don't always add up to a cohesive storyline. Potential developments go unresolved, scenes often end without follow-up, and most all the characters are poorly introduced.

For example, the Abbates seem to have a handicapped daughter, shown throughout the movie. It's never made entirely clear what her relationship is, though, plus she's rarely referred to by name and only offers a few lines of dialogue (still enough to beg the question, "Who is that?"). In one of the best scenes, Jon has a touching heart-to-heart with an assistant coach who had also experienced tragedy, but despite their connection and common ground, the coach never appears again in the movie.

Aidan Quinn and Andie MacDowell share much of the screen time as the Abbate parents. Both are talented veterans, but they terribly overact against the dull delivery of the novices in the movie, including relative unknown Ryan Merriman as Jon. Rick Bieber (a longtime producer but still new as a writer and director) mistakenly seems to think that emotion comes from building intensity. How else to explain the tendency for Quinn and MacDowell to speak steadily louder in scenes throughout the movie?

A potentially heart-wrenching exchange toward the end is completely undermined by such hammy overacting. One of the Abbates' well-intentioned neighbors drops by (for only this scene) to ask MaryAnne how she's doing—an awkward question for anyone wrestling with tragedy. MacDowell proceeds to chew out the neighbor, shrilly escalating in tone throughout, and then storms off. Between MacDowell's campy overacting, the "oh well" shrug/smile from the third Abbate son to the neighbor, and the scene's lack of follow-up, it's unclear whether this was meant to be funny or dramatic.

The 5th Quarter confuses sympathy for empathy. We feel sorry for the Abbate family's loss, but we never get to know them enough to truly feel their pain. After the opening credits, characters are quickly introduced through some generic "day in the life" moments just a few minutes before tragedy strikes. Another 15 minutes of setup would have gone a long way in grounding this story. 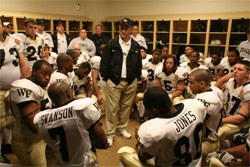 The film means well, pointing to the comfort of friends and family during tough times while also making a somewhat effective plea for organ donation. (A foundation in Luke's name has been established to that end.) But as far as sports films go, Facing the Giants demonstrates football better than The 5th Quarter. And as an emotional drama about dealing with grief, it's far less effective than a powerfully written and acted movie like 2010's The Rabbit Hole. (Granted, that film didn't point viewers to Christ for comfort, but neither does this one despite some positive Christian elements.)

The story of the Abbates and the 2006 Demon Deacons deserve better than this amateurish production.

The 5th Quarter is rated PG-13 for some thematic elements, primarily the death of a teen in a car accident and the family's grief. (The actual car accident is not seen.) Characters are also regularly seen drinking alcohol to drown their sorrow, and the film never really condemns it. The film also contains profanity (maybe 10 words total), plus references by teen boys about "getting some" action with girls. There are positive Christian elements—MaryAnne reads Scripture to Luke while he's in the hospital, Jon prays with a minister before the games—but the film also asks why God allows bad things to happen to good people without answering it.