This semester, I'm teaching research writing and film to 67 undergraduates. When they turned in their final project topics, I was startled to discover how many wanted to focus on families in the movies: parents trying to escape responsibilities, the fatherless generation, the need for unity among family members, people creating families for themselves when their biological family fails them.

I think this hints at something that preoccupies young adults (and older ones, too): the intense desire to know they are loved, to trust that the love will not go away. It's the kind of love that families are supposed to have for one another. And when traditional families fail them, they're busy constructing new ones, trying to believe that relationships can work.

That's also what lies at the heart of happythankyoumoreplease, and part of what undoubtedly accounts for its warm reception at Sundance last year. Written and directed by Josh Radnor (of CBS's How I Met Your Mother), the film tells the story of a generation in a decidedly un-self-conscious way. It take the themes of the genre often called mumblecore (artistic urban twentysomethings looking for love and life direction) and makes them into something more universal, less self-involved—and, blessedly, less cynical, more full of hope.

Sam (Radnor) is 29, a writer who lives in Brooklyn. He writes stories with names like "The Die-Alones" and "The Other Great Thing About Vinyl" and has been shopping his first novel around. On his way to his big meeting with the publisher (Richard Jenkins), he sees a young boy apparently get separated from his family on the subway, and tries to drop him off at the police station. But the boy, Rasheen, won't go, and tags along to Sam's meeting, to ... 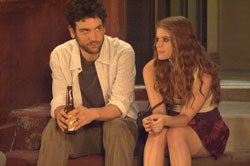