Rising star Lecrae says he was addicted to self; now Jesus is his "drug of choice."
Jonathan Sprowl|March 15, 2011

Theology and rap are hardly kissing cousins. One is the purview of academics laboring in seminaries, the other was born in the South Bronx in the 70s. Turns out they were made for one another. Rising rap star Lecrae seamlessly blends gospel-saturated lyrics with the hooks of southern style hip-hop, and the result is something you have to hear to believe.

Through Reach Records, the label he founded, he is leading a movement of artists spreading the message of the gospel through hip-hop which is quickly gathering a groundswell following.

His recent albums, Rehab and Rehab: The Overdose ,debuted at No. 5 and No. 4 respectively on the Billboard Rap albums chart. Rehab was also nominated for a Grammy in the Best Gospel Rock/Rap album category (Switchfoot's Hello Hurricane won). His music has piqued the interest of people from John Piper to Jay-Z.

We caught up with Lecrae shortly after the Grammys.

You just got back from the Grammys. What was that like?

It was really great. I think God strategically placed us there. I think I met everyone except Justin Bieber. I met a lot of people in the hip-hop community—Lil Wayne and Drake and those guys. I didn't have the longest of conversations with the guys at the top of the totem pole, but some of the producers and managers and lawyers. I really did get to build some strategic relationships. So I'm excited to see the fruit of those.

Let's talk about Rehab and Overdose. Why the theme of addiction?

I had just moved to a new city (Atlanta). My church (Blueprint Church) wasn't really established yet; I was helping with that. I was in a leadership seat and didn't have a lot of people who were pouring into me—just a dry season. I needed rehabilitation. ... 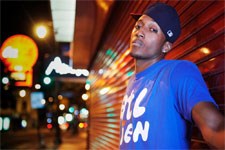