Terrence Malick wants his films to capture the magic, wonder, and mystery of the universe.
Brett McCracken|May 25, 2011

While this summer's slate includes the usual superhero action flicks and animated CGI tales, one much quieter release has the attention of art-loving cinephiles everywhere. That's what happens whenever a new Terrence Malick movie hits the big screen, in this case, The Tree of Life, opening in late May.

Malick, 67, has described this long-gestating, highly secretive project starring Brad Pitt and Sean Penn as "a cosmic epic, a hymn to life" in which Penn's character "finds himself a lost soul in the modern world, seeking answers to the origins and meaning of life while questioning the existence of faith." CT hadn't seen the film before going to press, but its appeal comes courtesy of its director's pedigree.

A Salinger-esque recluse and auteur with a distinct cinematic vision, Malick has made only four films over the last 40 years. After two acclaimed movies in the 1970s (Badlands, 1973; Days of Heaven, 1978), Malick disappeared for 20 years. He reemerged to great fanfare with 1998's The Thin Red Line, a WWII epic nominated for seven Oscars. Seven years later, Malick returned with the elegiac American origins story The New World (2005), lending his lyricism to the legend of Pocahontas and John Smith.

Part of what makes Malick unique is that he aims not just to tell a story but to reveal the world. His films endeavor to explore the very existence of man in a dynamic universe: the glorious, achingly beautiful creation characterized by good and evil, light and dark, war and peace, pleasure and pain.

The trailer for The Tree of Life begins with this line: "There are two ways through life: the way of nature, and the way of grace." Such duality is clear in Malick's other films, all of which juxtapose images of Paradise with harsh visualizations ...

Tags:
Directors | Film | Philosophy | Postmodernism
Posted:
May 25, 2011
More From: Brett McCracken
This article is from the June 2011 issue. 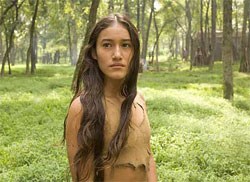