Summer action sci-fi flick Super 8, one of my favorite movies of the year and a sweet homage to the films of Steven Spielberg, releases to DVD and Blu-ray today. The movie's story takes place during the summer of 1979, when a group of middle-school friends witness a train crash and investigate subsequent "unexplained events."

With the DVD/Blu-ray release, 15-year-old Joel Courtney, who plays the lead role, is doing another round of interviews, telling how the movie changed his life. Courtney, just 14 when Super 8 was filmed, wasn't even looking for a movie role. He had only wanted to make a TV commercial and earn a hundred bucks, but word got around and he ended up auditioning for Super 8—and got the part.

Director JJ Abrams said the main reason he hired Courtney for his first-ever acting job was his sweet innocence—and a conversation with the young star from Moscow, Idaho, confirms that observation. He's a Christian and incredibly polite, answering many questions with "Yes, sir" and "No, sir."

Courtney, who says his role model is Tom Hanks, has already filmed two more movies: He's playing Tom in Tom Sawyer and Huckleberry Finn, coming out in 2013, and a teen boy in The Healer, coming out next year. We asked him about those movies, about Super 8, and how his faith affects his work as an actor.

What was the best part of being in Super 8?

I wouldn't be able to pick a best part. The entire thing was just incredibly amazing. I was so blessed to be able to even get the audition. It was completely by blessing.

I heard you were just hoping to make a commercial and earn $100.

Yes, sir. It's all true. I just wanted a commercial and a hundred dollars. That was my goal for the summer. 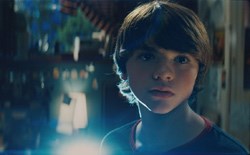