A few years back, playwright Horton Foote said that his harshest critics often complained that "not a lot is happening" in his stories. Oh, but what delectable "not a lot" it is. Foote won Oscars for Tender Mercies (1983) and To Kill a Mockingbird (1962), and was nominated for The Trip to Bountiful (1985)—all works of great tenderness and insight. (Let me recommend too the little-known 1918, which accumulates quietly and then unexpectedly provokes a painful compassion.) Many of his films also show a good grasp of what it is to be a person of faith, and how to persevere in prayer when things are hard.

Main Street—releasing to DVD today—will serve as Foote's farewell, for he died in the spring of 2009, shortly before the movie started filming. It's the story of a North Carolina town that is dying—Main Street is a row of empty storefronts, and empty tobacco warehouses ring the perimeter.

Ellen Burstyn portrays Georgiana, elderly daughter of a one-time tobacco baron, who lives in faded splendor in the grand home her daddy left her, and worries about making ends meet. Burstyn is extraordinary in this role, delivering extended speeches that require a whole array of emotions, and doing it beautifully. She herself is beautiful at 79, with no visible sign of face lift or makeup.

Georgiana is a sympathetic character rather than the face of Establishment Evil. There's an interesting character-revealing moment when she says that the collapse of the tobacco market was taken by her father as "a curse put upon us for our sins"—not the sin of selling tobacco but the sin of pride, of putting his trust in money and power. "Every night the year that Papa died I would hear him in his room, asking God to forgive him ... 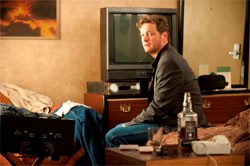