A thriller not so much about politics as moral compromise, and the deterioration of one man's ideals.
Josh Hurst|October 7, 2011
Our Rating

For the first thirty minutes or so of The Ides of March, I thought it was basically going to be an updated reworking of The West Wing, Aaron Sorkin's enduringly popular TV drama that offered a dramatic, behind-the-scenes look at life in the White House. Sorkin's show was rather famously modeled after the Clinton administration; his President Barlett was a Democrat whose White House faced many of the same issues as Clinton's, and was even marred by a highly-public scandal.

The Ides of March, meanwhile, is about a different kind of Democrat—a young, charismatic politician who isn't yet in the White House but would very much like to be. He speaks of a different kind of politics, a change-up from Washington as usual. His supporters are energized by his vigor, and by his perceived integrity; his opponents see him as either too inexperienced or too extreme. Why, even his campaign posters bear a striking graphic resemblance to the iconic Obama/Hope images.

This politician is Mike Morris (George Clooney, who also directed the film), a sitting governor who is running in a Democratic primary that is, essentially, the whole election; the Republicans don't have any good candidates, but his Democratic opponent offers some stiff competition. But we see from the get-go that his campaign is very different than that of his opponent. Indeed, the competitor's campaign is being run by Tom Duffy (Paul Giamatti), a veteran political hack who's just in it for a win, and doesn't mind getting down in the dirt and slinging some mud if it's what will get his man into the Oval Office. 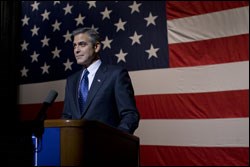