In a land where the currency is time rather than money, fighting for justice means fighting for your life.
Frederica Mathewes-Green|October 28, 2011
Our Rating

The most frightening, and eerily timely, image in In Time comes near the end, when we see signs of a certain kind of trouble spreading throughout the world—a danger that is no longer merely threatening, but has actually arrived. It's a sign of the times that threatens to turn the film from a nifty thriller into an unintentionally obtuse message-movie.

And that's a shame, because that message isn't what the film is all about. This is a movie about time. "I don't have time. I don't have time to tell you how it happened," lead character Will Salas (Justin Timberlake) says in an opening voiceover. The situation is that money has been literally replaced by time. Humans have been genetically modified to live 25 years. On your 25th birthday you stop aging, and you start dying. On your forearm is a row of 13 digital spaces, blinking green numerals, that indicate how many years, days, seconds you have left. The countdown begins, and after one year's grace period, you must find a way to earn every minute of life to come. Otherwise you "time out"—you die.

Will lives in a working-class district in Dayton. Each day he has to find a way to earn enough hours to live one more day; as he says, "I want to wake up with more time on my hands than there are hours in the day." The re-assigned meanings of almost any story about time are just one of the ways this time-based economy has been cleverly thought through. There are "Minutemen" who mug and rob unwary citizens (time is exchanged by clasping wrists together), "Timekeepers" who enforce the law and "keep the clock running," and "time zones" separating the rich from the poor. Someone born with a silver watch on his wrist is said to "come from time," rather than "come from money." ... 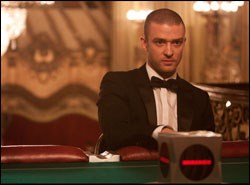