An inspiring sports story of defying the odds falls short of its full potential.
Carolyn Arends|October 21, 2011
Our Rating

The year is 1971, and the setting is the small but beautiful campus of Pennsylvania's Immaculata College, a Catholic school for women. Low donor support has the administration struggling to keep the doors open for its 400 students; the priest overseeing the college (Malachy McCourt) warns its Mother Superior (Academy Award winner Ellen Burstyn) that it will take "an act of God" to save the school.

When an ambitious 22-year-old named Cathy Rush (Carla Gugino) is hired to be the school's basketball coach (by virtue of being the only applicant for the position), no one on campus recognizes her as the answer to the school's prayers. Sports are considered little more than a way to keep young women out of trouble, and Rush soon discovers that the gym has burned down and there are no plans to replace it. Working with no facilities, no administrative support, and barely enough players for a team, the rookie coach and her Mighty Macs will be lucky to survive the season's first game. But sometimes miracles do happen, and the Immaculata campus is as good a place as any.

This better-than-fiction story of Rush and her team's rise from obscurity to a national championship is perfect fodder for an Underdog Sports Movie, and that's what writer-director Tim Chambers aims to deliver. Unfortunately, the film has more mixed results than the team it chronicles, due chiefly to a dialogue and speech-heavy script that is too self-consciously aware of all the Big Themes it wants to explore.

Before the 1971-72 season, no national championship existed in women's basketball, despite the success of men's NCAA tournament. Part way through her inaugural season, Rush and her team discover that the recently founded AIWA (Association for Intercollegiate Athletics ... 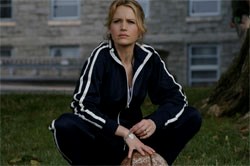