If you've seen the trailer, you probably know that The Three Musketeers is a film largely uninterested in close adherence to its source text. The promotional campaign for the film has devoted itself largely to the massive airships and airborne battles that provide the movie with its defining set pieces and most distinctive imagery. There's really no precedent for these machinations in the work of Alexander Dumas, but even if you took out the flying machines and other chronologically incongruous technology, this is still a film that plays fast and loose with its own origins. Some of the basic plot elements are here. There is plenty of swashbuckling, and, of course, the "all for one and one for all" tagline.

And if that kind of thing bothers you, then by all means, stay as far away from The Three Musketeers as possible. You'll have a hard time viewing it as anything but a desecration of a sacred text. Personally, I don't much care about how faithful this work is or isn't to its source material, any more than I did with Guy Ritchie's riffing on Sherlock Holmes. In both cases, literary adaptation seems wholly beside the point. These movies take some familiar tropes and trappings, stylize them, and turn them into action movies. I'm perfectly content with that.

What I am a bothered by is how poorly executed this particular version is. Directed by Paul W.S. Anderson, who also did the Resident Evil movies, this is a picture that's filled with ideas, so it's never boring and never feels lazy or phoned in. It's the best kind of bad movie: One that really seems to be trying for something, but misfires at every level, its plot points never interlocking and its characters never connecting. But it's fun to look at. And despite its vague ... 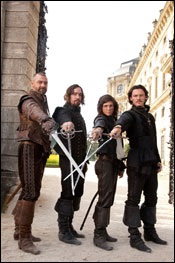