The Switchfoot frontman on winning a Grammy, songwriting, and their new album.
Mark Moring|September 27, 2011

If I won a Grammy Award, I think I'd display it prominently. Not Jon Foreman of Switchfoot, the Christian rock band that won music's top prize earlier this year for its last album, Hello Hurricane. When we asked Foreman where he'd put his statuette, he had to think about it … until finally revealing that it was "in a box in the corner."

Foreman says that he and his bandmates are still making music for the same reasons they started making it in the first place: They simply love it.

That's evident on their new album, Vice Verses (lowercase people/Atlantic), which releases today. We recently chatted with Foreman about that Grammy, the new record, songwriting, and what "making a living" really means.

This is the first time we've talked since you guys won a Grammy. Congratulations!

Thank you. It was really interesting. Winning the Grammy kind of cemented everything that I really thought—the idea that there's no award that can be greater than the reward of simply playing music night after night. It's an honor to win it, but hearing somebody say that a song changed their life is much more encouraging.

So where is your Grammy now?

It's in the studio somewhere in a box, I think.

It's in a box? Not up on a shelf prominently displayed?

No. I mean, we're thankful for it. But what do you do? I can almost give it to my parents and leave it at their house probably better than putting it somewhere around mine.

I read your essay in the Huff Post. When did the definition of "making a living" change from something financial to something less tangible for you?

I don't know that it's ever changed for me. Being in Switchfoot, we never expected actually to make money for music. That was never the point. And so for me, to be able to do what ... 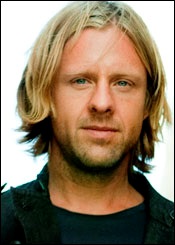