A clever, original and ambitious thrill ride that blows the roof off the movie you think it is.
Todd Hertz|April 13, 2012
Our Rating

The titular cabin in The Cabin in the Woods seems pretty run-of-the-mill—small, unassuming, common. But when an unseen cellar door opens, the cottage is suddenly much bigger and richer. What was previous seen of the cabin turns out to be merely the tip of the iceberg. There's more below the surface.

The cabin is a good analogy for this surprising, original, and inventive movie. What if horror films—like the slasher movie Cabin portends to be—are only a small, visible part of something larger? What if this connection, this greater reality, is the reason for all the very common archetypes, plots, and conventions they share?

It's an avant-garde re-shuffling of tired genre tropes—in other words, classic Joss Whedon, Cabin's co-writer (creator of TV shows including Buffy the Vampire Slayer, Angel, and Firefly and director of Serenity and the upcoming The Avengers). In fact, Cabin can be seen as a natural extension of Buffy. Whedon responded to horror movies' tendency to slaughter the blonde cheerleader by creating one who the monsters had to fear. With Cabin, Whedon and co-writer/first-time director Drew Goddard (a stand-out writer on Buffy, Alias, Lost, and Cloverfield) don't just play with character conventions but shake up the genre itself, question deep-set traits, poke at our desensitized voyeuristic bloodlust, and mimic the manipulative process of making these movies.

How Whedon and Goddard approach this is best left as a surprise. As New York Magazine wrote, the "very premise is a spoiler." Suffice it to say, the slasher-movie storyline of college students (an alpha male, a bookworm, a stoner, a virgin, and a vixen) being slaughtered in the woods is only one of two intersecting plotlines. And not even ... 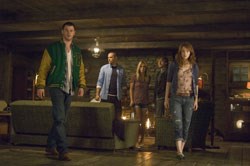