The world's foremost expert says chimpanzees may even have a kind of spiritual awareness.
Steven D. Greydanus|April 20, 2012

As the new Disneynature film Chimpanzee opens today (our review), we had the opportunity to chat with Jane Goodall, the world's foremost expert on chimps. In an interview with CT film critic Steven Greydanus, Goodall talked about the film, the behavior of a species she has observed for decades, and a possible "spiritual side" to our primate friends. A portion of the film's opening-week box office proceeds will be donated to the Jane Goodall Institute.

What did you think of the film?

How does it compare to other chimpanzee documentaries you've seen?

Well, it just puts them all in the shade. It's absolutely brilliant. It's a mixture of unbelievably good cinematography, fantastic behavior of the chimpanzees, the incredible feeling the filmmakers have got for what it's like to be deep in the forest, the spectacular views of the whole area from above. And then on top of all that, you've got this extraordinary story unfolding within the chimpanzee community—a behavior which is almost unheard of. It's an incredible film.

What misconceptions about chimps do you think people still have? Will this film help to correct any of them?

I think it will give people a real feeling for what it's like for chimpanzees out in the wild, and that will be new for most people. They'll come away totally in love with the infant [an adorable little one named "Oscar"] who's the star of the film, and moved by the tender side that emerges in the great big dominant alpha male. That's charming. They'll realize that underneath the tough exterior of a male chimp can be a tenderness which we've recorded on a number of occasions.

Although they'll fall in love with Oscar, people should also realize that he'll grow up to ... 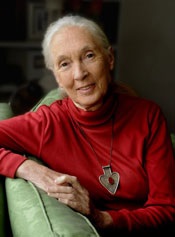