A newly elected pope doesn't quite make it to the balcony in this muddled comedy-drama.
Steven D. Greydanus|April 6, 2012
Our Rating

Pope Benedict XVI made no secret that the papal office came as a heavy burden to him—as a cross to be carried. Indeed, as Joseph Cardinal Ratzinger, he had repeatedly tried to retire from his previous post as head of the Vatican office for overseeing church doctrine, but Pope John Paul II always refused his resignation. When his predecessor died in 2005, Ratzinger hoped to retire after the papal conclave. During the conclave, when the votes began to go his way, the cardinal—by nature a shy and retiring academic—began to pray, "Please don't do this to me."

That unheeded prayer is echoed by practically the entire college of cardinals in the papal conclave in the opening of Nanni Moretti's We Have a Pope, or Habemus Papam. (The title refers to the traditional Latin phrase with which the new pope's election is proclaimed from the central balcony of St. Peter's Basilica, where the pope makes his first appearance and gives his first Urbi et Orbi blessing to the world.)

Moretti gives us closeups on one cardinal after another, their inner pleadings in voiceover, until the camera pulls back as a clamor of recusant prayers ascends to heaven: Non io, Signore … Not me, I pray thee … No, Señor. This mildly amusing but ham-fisted sequence is typical of the film's sensibilities, for good and for ill—more the latter than the former, alas.

In a way it's like the antithesis of a Dan Brown novel. Brown's stories peer with feverish, lurid imagination at the inner workings of the Catholic hierarchy, discovering all manner of ridiculous subterfuge, ruthlessness, and skulduggery. Moretti's film hardly peers at all. It's good-natured and inoffensive, regarding the cardinals with gentle amusement. But there's ... 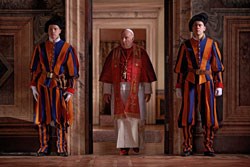