The host of a controversial new documentary doesn't hesitate to make the comparison.
Jasmine YoungAugust 9, 2012

How does a former NAACP chapter president, a self-proclaimed liberal who championed the likes of Al Sharpton and Jesse Jackson, end up in the hyper-conservative Tea Party?

C.L. Bryant will tell you how, because that's his story—one he shares in Runaway Slave, a new documentary now playing in limited theaters. In the film, Bryant, former pastor of a Texas Baptist church, depicts the conservative roots of the African American community and argues that a new Underground Railroad movement is necessary for liberation from entitlements.

Bryant believes that many blacks don't appreciate the freedoms and opportunities in place since the civil rights movement, instead living as if they're still under oppression and injustice. He also calls on conservatives to tell their side of African American history.

Bryant spoke with CT's Jasmine Young about his intentions and purpose behind the film.

You were once an NAACP leader, and now you're a conservative Tea Party patriot who openly criticizes the NAACP. How did that happen?

Twenty-three years ago when I was president of the NAACP in Garland, Texas, I was asked by the national office to speak at a prochoice rally. As a minister and person of faith, I could not reconcile that, so I turned it down. In doing so, my star that was rising in the organization began to take a decline. They not only wanted to control me, they wanted to use me to control a block of people. So I started on a conservative path with them turning on me. 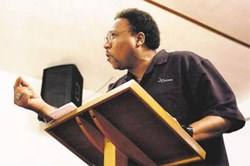