Comedy fans know Jeff Foxworthy for his particular brand of Southern-fried humor, with many of his best one-liners beginning, "You might be a redneck if …" In more recent years, he's become better known as the host of Are You Smarter Than a Fifth Grader?, which enjoyed a popular four-year run on Fox TV before being cancelled last year.

Now Foxworthy is gearing up for his next TV gig as host of The American Bible Challenge, a one-hour show premiering Thursday night (8/7c) on the Game Show Network (GSN). (A preview.) Foxworthy, 53, looks forward to hosting the show that will test contestants' knowledge of Scripture; teams will be playing to win money for charities.

Foxworthy spoke to CT about his new job, his faith, his sense of humor, and his desire to make the Bible more accessible to millions of viewers.

How did you end up with this gig?

Fifth Grader didn't get renewed last year, which I really enjoyed doing. I never thought I would do a game show, but now I guess I'm now officially in that genre. So the people behind Bible Challenge asked me if I'd be interested. I had to think about it, because it's a tricky area: Part of me was like, Do you do a game show about the Bible? But I thought, Okay, God, you know I'm an idiot, so you've got to make this clear if you want me to do this or not.

What ultimately convinced you to say yes?

That the people that are playing on the show are not playing for themselves. They're playing for money to bless somebody else, whether it's building wells in Africa or inner-city kids or something, some charity or ministry of their choice.

How would you do as a contestant on this show? Are the questions pretty hard? 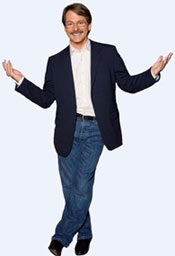