A well-done but violent period piece about the wild world of backwoods bootlegging.
Brett McCrackenAugust 29, 2012
Our Rating

Director John Hillcoat likes to make movies about the tenuous balance between humanity, order, and civilization on one hand, and savagery, chaos, and lawlessness on the other. His Australian western The Proposition (2005) explored this territory, as did his dark adaptation of Cormac McCarthy's The Road (2009). With Lawless, a violent, Prohibition-set bootlegging/crime drama, Hillcoat continues in this vein, attempting to understand the themes of survival and goodness in the midst of a world on the precipice.

Based on the 2008 book, The Wettest County in the World—by Matt Bondurant, grandson of one of the story's main characters—Hillcoat's film depicts the true 1920s-30s lives of the Bondurant brothers, a trio of infamous moonshiners and bootleggers in Franklin County, Virginia. Forrest (Tom Hardy), Howard (Jason Clarke), and Jack (Shia LaBeouf) run an impressive capitalistic venture, supplying high quality moonshine to the thriving local bootlegging industry at the height of Prohibition. They're making good money, steering clear of mob run-ins and fortifying their status as local legends. Everything is illegal and the world is lawless, but the Bondurant boys are living in relative peace.

Things change, however, when the "law" comes calling, in the form of Special Agent Charlie Rakes (Guy Pearce). Of course, this being an era of widespread institutionalized corruption, Rakes is the most lawless of all. He's a psychotic, bloodthirsty villain in a pinstriped suit and white gloves. He takes aim at the Bondurant operation and orchestrates a bloody, ruthless offensive to take the brothers down.

The plot of Lawless doesn't offer many surprises and the film feels pretty standard as Prohibition crime dramas go. If you've ... 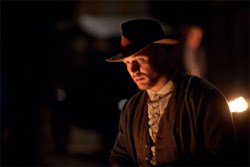