A thriller about the hunt for Osama bin Laden captures the conflicted, complex moral issues of the operation.
David Roark|December 21, 2012
Our Rating

Remember the night of May 2, 2011, when the news broke of Osama bin Laden's death? A range of responses and emotions flooded Twitter and Facebook. Some scoffed, others celebrated, and few said nothing at all. It was a time of reprieve, yet questions lingered: Would bin Laden's death really put a damper on al-Qaeda and terrorism? Would it truly bring peace and satisfaction to the friends and families who lost loved ones on 9/11 and in the ongoing war on terror? Was it an act of justice or revenge? Was it all really worth it? 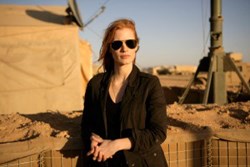 Given such ambiguities and a range of opinions, it should be no surprise that Zero Dark Thirty, Kathryn Bigelow's smart and exciting thriller about the hunt for—and killing of—bin Laden appears to offer no concrete answers to such questions. But if one looks closely enough, the film's realistic, almost journalistic, aesthetic actually does provide some answers. Contrary to numerous arguments that she's impartial as a director, Bigelow (who won an Oscar for 2010's The Hurt Locker) unavoidably reveals some bias by merely portraying the story. Even more, as an artist, she is forced to choose expressions and depictions of the events, from torture scenes to the final bloody raid. Zero Dark Thirty only seems "neutral" because Bigelow, working with a script from Mark Boal, proves conflicted in her stance, caught between a sense of justice and a remorse for the detrimental implications of the operation.

But it's that mixed stance—a conflicted view held by many—that makes the film work so well. While Bigelow and Boal—who did extensive research—claim to stay true to the details, the film is truer in a different sense, in that it seems to represent their own outlook on the War on Terror, through the lens of this bin Laden narrative. It's a perspective that's willing to acknowledge that it doesn't pretend to have it all figured out, but admits to the complexities—because war, particularly this one, is no simple matter. The filmmakers' perspective steers clear of politics, of a greater polarization between left and right (and right and wrong), and goes deeper to illuminate the paradoxical nature of human experience, specifically the struggles between head and heart, justice and mercy, war and peace.

Zero Dark Thirty would in no way achieve such sincerity and complexity if not for its talented cast, including Jason Clarke as a fearsome CIA interrogator, Kyle Chandler as his stern superior, and particularly Jessica Chastain, who gives her strongest, most multifaceted performance to date. As Maya, a feisty young CIA agent committed to killing bin Laden, Chastain might just embody Bigelow's own internal conflict—resolute but uncertain, confident but confused. And as determined as Maya may be to see her goal through to the end, she often appears too physically and emotionally exhausted to finish, too weighed down by her actions. 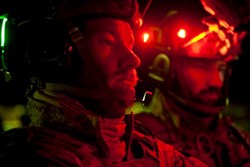 Such ambivalence plays out in a number of different ways, but starts with the various scenes of torture early in the film. Bigelow has taken heat over these scenes by critics like Glenn Greenwald (of the UK's Guardian) and David Edelstein (of New York magazine)—partly because many sources have argued that such techniques did not actually result in intelligence used to find bin Laden. As Edelstein wrote even while naming Zero Dark Thirty the year's No. 1 film, it "borders on the politically and morally reprehensible. By showing these excellent results—and by silencing the cries of the innocents held at Abu Ghraib, Bagram, and other 'black sites'—it makes a case for the efficacy of torture." I'm not convinced that's true, through, given Bigelow's brutal portrayal. With the same sharp style of The Hurt Locker, from a meticulous score by Alexandre Desplat to heavy dialogue and tight hand-held camerawork, Bigelow and cinematographer Greig Fraser candidly capture these horrific scenes; they make us feel deeply uncomfortable from the get-go. Speaking through the severity of such violence, Bigelow makes her moral point of view clear: She sees torture, particularly waterboarding, for what it is—dehumanizing and degrading. She also sees violence and war in a similar way. When her film finally reaches its climax and a team of Navy SEALS invades bin Laden's mansion, the finale focuses more on the crying women and children present then the actual takedown of bin Laden, evoking sympathy.

Still, despite its disdain for torture and violence and a humanization of its enemies, Zero Dark Thirty paints the effects of bin Laden's death in a positive light. Due to the intensity of the climax—a suspense that keeps you anxious despite knowing the outcome—a subtle feeling of satisfaction overtakes the tone when the man behind 9/11 is finally put to death; it's a sigh of relief. Bigelow takes in the moment through the quiet celebrations of the soldiers and Maya's look of consolation when she zips open the body bag to identify bin Laden, treating it as a special part of American history. Almost celebratory, this finale stands in contrast to Bigelow's prior handling of violence in Zero Dark Thirty, and the juxtaposition epitomizes her conflicted understanding of the matter, the very thing that makes Zero Dark Thirty relevant and honorable. 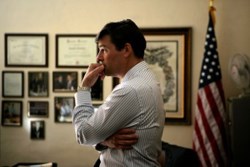 This inner conflict culminates through her muse, Maya, in the closing sequence. After Maya completes her mission and boards an airplane, the camera pans in for a close-up; she looks both scarred and satisfied, as a tear rolls down her face. It's a moment that sums up Zero Dark Thirty precisely, and a moment that in of itself answers some of those questions that still surround bin Laden's death. In Maya's involved expression, Bigelow doesn't reveal whether she believes the whole operation was worth it, because, like so many of us, she probably doesn't know. That said, she does suggest that bin Laden's death was a good thing given the evil which the man represented—and his potential for masterminding more terrorist attacks. But at the same time, Bigelow acknowledges the detrimental implications of achieving his death and, moreover, its inability to bring complete redemption and resolution to the many affected by his actions.

In this sense Bigelow's masterful vision—a vision not only realized aesthetically, with a gripping plot and an emotional connectedness, but also morally through an honestly complex view on war and bin Laden's death—answers our questions with another set questions: How do we express love, and avoid hate and harm, in a world this dark and bleak, a world where an enemy stands ready to take our lives? Put simply, in a situation such as ours, should mercy trump justice? What would that look like? Who really knows?

Zero Dark Thirty is rated R for strong violence including brutal disturbing images, and for language. The torture scenes early in the movie are graphic and unsettling. We see one of the CIA's detainees being waterboarded, in which water is poured over his face while he is immobilized. We see many people die in various terrorist attacks, usually involving suicide bombers. In the finale, when a squadron of Navy SEALS goes after bin Laden in his mansion, we witness several people being shot down with automatic weapons, including women. Most of the characters in the film use profanity often, including the protagonist, Maya.