When gospel music singer Anthony Evans stepped out to croon the Marvin Gaye classic "What's Going On?" on NBC's The Voice (Mondays, 8/7c), he was nervous. Like every other contestant, he only had 90 seconds to impress the judges in his "blind audition," to convince one of them to push a red button that would send him through to the next round.

But Evans, already a professional artist with six albums under his belt, figured he really only had a little more than 10 seconds to make an impression—and the final 10 seconds at that. Because "What's Going On?" is so subdued, Evans held back on his "big voice" capabilities until the very end, when he cut loose. And then, about 10 seconds away from elimination, judge Christina Aguilera smacked her button, thus putting Evans on her team and buying him at least a couple more weeks on the show.

Evans, the son of popular pastor and author Tony Evans, says he's having a blast, and that it's a fun break from his normal gig as a gospel artist and worship leader. He wants to win, but says he wouldn't mind if someone else did instead. We spoke with him by phone from Los Angeles.

Why did you want to be on The Voice?

It was kind of random. Jeremy Camp and my drummer were at my house in Nashville over a year ago, and they were like "Anthony, just do it for fun. Why not?" So I just sent something in [to the show]. They saw a YouTube clip of me and called me for the first season, but I couldn't come because of other obligations. Then they called again last July and asked again, and I was like, "You know what, it's kind of a random opportunity, and

How did you end up choosing "What's Going On" for the song?

People who know me really well have been asking me that, because it just kind of felt like ... 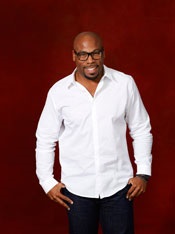