In this Oscar-nominated documentary 'Friday Night Lights' meets 'The Blind Side.'
Brett McCracken|February 17, 2012
Our Rating

Undefeated is essentially a real-life documentary version of the latter seasons of the TV show, Friday Night Lights. The Oscar-nominated film—directed by Dan Lindsay and T. J. Martin—follows the 2009 football season of Manassas High School in North Memphis, a school more familiar with metal detectors and juvenile detention than with winning football games.

Like the fictionalized East Dillon Lions in Lights, the Manassas Tigers are comprised of mostly African-American players with the deck stacked against them. They come from broken families and poverty, their grades are poor, some have been to jail, and the idea of college is a dream most have long abandoned. But they have a coach, Bill Courtney, who believes in them, a coach who is like Lights' Eric Taylor (Kyle Chandler) both in his fatherly compassion and in his tough-love commitment to excellence. The film is a season-long slice-of-life reflection on what winning looks like in this unlikely partnership between a coach, his players, and a community. It's more than just a game, of course; and "undefeated," as we come to see, is about more than just avoiding a loss on the scoreboard. 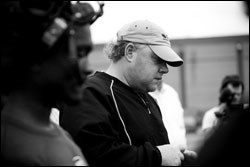 Like any good documentary about a group or ensemble, Undefeated focuses on a handful of characters rather than everyone on the team. One of these is "O.C.," the massive senior left tackle who has perhaps the most talent and long-term athletic potential of anyone on the team. O.C.'s arc is strikingly similar to that of Michael Oher in The Blind Side. With his poor grades and dreadful test scores threatening to derail his college prospects, O.C. is taken in by a wealthy white family in posh East Memphis, where he spends a few days each week with a private tutor, in the hopes that he'll raise his scores enough to be recruited by major colleges. Along with O.C., the film focuses on "Money," a senior honors student and undersized offensive lineman hoping to earn an academic scholarship, and Chavis, a talented junior linebacker with anger issues.

This trio provides a compelling representative sampling of what, through vehicles like Friday Night Lights and The Blind Side, we've come to imagine are the typical trials of high school football players in lower-income communities. For them, football is not just a prestige position in the high school status hierarchy; it's an anchoring community and a motivating purpose—a high intensity training ground where discipline, character, and teamwork matter. It's perhaps the only place in these kids' lives where some sort of "family" exists in a unified, healthy way. It might be the only place in their lives where an older male speaks into their story with character, wisdom, leadership, and love.

In this case, that older male is head coach Bill Courtney, and he's the heart of the film. Since Manassas has no money to fund football, Courtney is a volunteer head coach. A successful entrepreneur, family man, and former college football player, Courtney began coaching at Manassas in 2004 out of a love for the game and a desire to give back to his community by molding young men and giving them a shot at success. It isn't an easy task. Manassas is a losing team that hasn't won a playoff game in its 110-year history; they're underfunded, ridiculed, written-off by most. Courtney—a portly fellow with a mullet and a thick southern drawl—spends as much time breaking up fights, keeping his players in school and away from jail as he does coaching them on the field. Again, if this sounds like Coach Taylor and his challenges at East Dillon in Lights, it's because it more or less is, minus the Hollywood faces and soap opera storylines.

Stylistically, Undefeated borrows from Lights as well, with the now familiar "documentary" emphasis on handheld camerawork, jerky zooms, extreme close-ups of faces, pre-game team prayers set against a montage of on-the-field drama, and of course a smattering of poetic footage of rundown houses and melancholy urban landscapes in Middle America. In some ways it feels excessively familiar, a bit too close to Lights in subject, style and demeanor. At least there is no Explosions in the Sky on the soundtrack.

The team learns a lot about character

And yet in spite of its not-so-novel concept, Undefeated works. It's a powerful, emotionally stirring film, mostly in the scenes in which Courtney interacts with his players both individually and collectively. He loves them, it's clear. And they love him back. Courtney is not just in this to turn around the Manassas football program. He wants to give these young men something many of them don't have—something, we come to find out, Courtney didn't have either—a father. When Courtney grabs a suffering or angry young man by the shoulders and says "you're better than this," or hugs a player who just made a key play and says "I'm proud of you," he's giving them the words he knows they need because he needed them too. He's giving them the support and love every son needs from a father.

In the season which Undefeated chronicles, do the Tigers indeed go undefeated? No. They lose their first game, in fact. But the film is about overcoming other forms of defeat. It's about overcoming rough circumstances and systemic hopelessness to press onward and live a life. It's about not being defeated by our own pride. It's about not being defeated by losses and setbacks in football and in life. As Coach Courtney frequently reminds his players, character is not how we respond to successes in life; it's how we respond to failures.

Sport is at its best when it reveals a microcosm—a reflection of life's everyday cycles of pain and gain, risk and reward, tragedy and triumph. And sports narratives like Undefeated succeed when they pick up on the existential echoes of games like high school football. "It's more than a game" is a cliché, but it's true, in the same way that an opera is more than just singers and costumes on a stage, and a painting is more than just pigment and brushstrokes on a canvas. 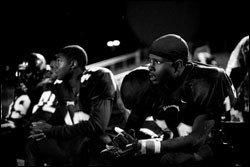 It's about so much more than winning or losing a ballgame

Football can be a canvas against which the highest of human drama and the noblest of human character can be displayed, and Undefeated recognizes this. It's a simple, familiar story, heart-warming and tear-jerking by virtue of its sincerity, and yet it's undeniably profound. Uplifting narratives like this are every bit as real, gritty and true as the bleak stories so pervasive in our cynical world today, and we must continue to tell them to each other and learn from them.

Undefeated is rated PG-13 for language, though there is nothing worse than the s-word, which is used perhaps a dozen times. Some parents may be cautious about the fact that in one scene the coach is seen praying very earnestly with his team and in other scenes is using the s-word—but the coach's unconditional love for his team is undeniable. It's a very uplifting, values-oriented film that has great lessons about character, teamwork, sacrifice, and discipline.

1 of 4
Coach Bill CourtneyCourtney with his star lineman, O. C. BrownThe team learns a lot about characterIt's about so much more than winning or losing a ballgame