A straightforward, old-fashioned haunted-house story has become almost a novelty in our time.

Demons are another story. We've had no shortage of exorcism films; demonic possession is practically old hat. Zombies are everywhere, and vampires are still riding high. We're chock-a-block with the undead, but we've almost forgotten the other half of the postmortem horror equation: the unquiet spirit, and all that goes with it. The ramshackle house that no one dares stay in overnight; a reflection or glimpse in a window of a face where there can be no face; doors that open and close by themselves; bodies not properly buried in sacred ground. Even The Sixth Sense and The Others (spoilers!) were unorthodox ghost stories, told, in a sense, the wrong way around, from the spectral point of view.

Perhaps it's partly because we aren't quite sure what a ghost actually does. As C. S. Lewis noted in The Problem of Pain, "No one is primarily afraid of what a ghost may do to him, but of the mere fact that it is a ghost. It is uncanny rather than dangerous, and the special kind of fear it induces may be called dread." Dread is more difficult to manufacture than a visceral reaction to something with arms and teeth that can grab and bite and leave a trail of potentially R-rated blood and gore in its wake. Anyway, with a ghost, the brave and optimistic may always hope to find a way of placating it, of discovering the secret of its anger and helping it achieve peace and move on. No one ever placated a zombie or a vampire.

The Woman in Black, based on the eponymous 1983 novel by Susan Hill (previously adapted as a long-running stage play and a TV movie), is as traditional a ghost story as one could wish. Its very clichés have become fresh. It ... 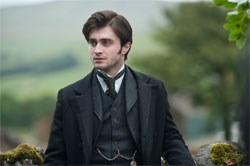