How do you tell the story of war? These real-life epic tales can span years and continents, involving grand conquests and tiny tragedies. They change the shape of entire societies, countries' borders, and personal relationships. Any slice of the whole you choose will leave something out—and will inevitably say as much about the storyteller as it does about the war.

The Flowers of War takes us to the beginning of the Second Sino-Japanese War in 1937 on the outskirts of Nanking. Director Yimou Zhang (Raise the Red Lantern, Hero, House of Flying Daggers) focuses our attention on a walled cathedral, where a handful of schoolgirls and a dozen prostitutes are hiding out from the invading Japanese troops, guided by a precocious 13-year-old orphan, George (Huang Tianyuan), and a drunkard American mortician, John (Christian Bale), who's just arrived to bury the recently killed priest.

Schoolgirls and prostitutes. An orphan boy and an alcoholic man. Flowers and war. We're clearly looking at the dichotomies of war—particularly the beauty amidst the unthinkable horror. And Flowers gives us plenty of both.

At the outset of the film, the Japanese have just taken over the area and both groups of females have narrowly escaped to the large, beautiful cathedral. For the girls—all around 12 or 13—this sanctuary is home, a familiar place of learning and safety. For several of the orphans in the group, including George, this is the only home they have. (One of these girls, Shu, played by Zhang Xinyi, offers us the recurring voiceovers.)

The first adult on the scene is John Miller (Christian Bale), the opportunistic American, who is soon searching the place for money and booze. We don't really know how he's gotten there in ... 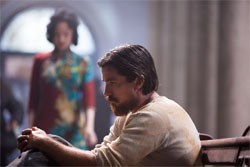