He's 54, a grandpa, and has been making music for three decades. But Smitty isn't slowing down one bit.
Mark Moring|January 17, 2012

It'd be easy for Michael W. Smith to kick off his shoes, settle down in a recliner, take long afternoon naps, and read books to his six grandchildren at his family farm in Tennessee. He's 54, has released 24 albums in 30 years (with more than 15 million sold), and won three Grammys and 44 Dove Awards.

He could kick back and live royally off the royalties for the rest of his life. He doesn't need to make any more records. But he just can't help himself.

In November, Smith released Glory, his second all-instrumental project. And today, he and Provident Label Group release Decades of Worship, a 13-track album that is essentially a "best-of" compilation (though he's reluctant to use those terms) of his most enduring worship songs—from "Agnus Dei" to a newly remastered version of "Great Is the Lord."

We recently interviewed Smith via e-mail to talk about his latest albums, why he loves instrumental music, the state of modern worship, and why he's not at all interested in slowing down one bit.

Glory is your second all-instrumental album, and you've said before that Freedom is your favorite of all the records you've done. Why is that?

When I did Freedom, none of us knew what to expect. An instrumental project isn't very common for our market. But I wanted to do something that wasn't limited to one market. Someone once said, "After silence, that which comes nearest to expressing the inexpressible is music." I think there is a lot of truth in that. Freedom turned out to be the most gratifying record I had done. There was such freedom in just expressing myself musically, without the limits of lyrics or time. When I meet people, I get more comments on Freedom than anything else I have done. 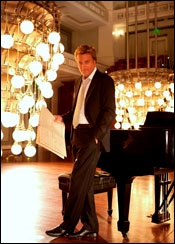