A horror story about parenting, asking what is, and isn't, beyond our control.
Brett McCracken|January 27, 2012
Our Rating

When Kathy Harris and Sue Klebold woke up on April 20, 1999, they could not have anticipated that before the day was through, their sons—Eric and Dylan—would be known throughout the world as the perpetrators of one of the bloodiest school massacres in American history. Nor could they have known that from that day forward, the world would look scornfully at them—the parents—as the culpable failures who raised such monsters. We Need to Talk About Kevin is about the sad and terrifying emotional terrain occupied by mothers like Kathy and Sue—mothers whose sons turned out horribly wrong. It's a harrowing look at the days before and after a Columbine-style massacre, told from the perspective of the teenage killer's mom.

In this fictional story, based on Lionel Shriver's 2003 novel of the same name and directed by Lynne Ramsay (Ratcatcher), the mother in question is Eva Khatchadourian (Tilda Swinton), and the son in question is Kevin—played at various ages by multiple actors, but most chillingly by Ezra Miller as teenage Kevin. The film cuts back and forth in time between memory flashes of the actual massacre Kevin commits in his high school, the aftermath years in which Eva tries to put the horrors of her past behind her, and a hodgepodge of memory vignettes from the raising of Kevin, who from birth was a "problem child."

Much of the film takes place in the past as Eva and her husband Franklin (John C. Reilly, in an rather bland, but appropriate role) raise their two kids in an unnamed-but-wealthy suburban setting. The firstborn is Kevin, a dark, angry boy who looks goth and has a passion for archery (red flag?). His little sister Celia (Ashley Gerasimovich) is quite his opposite: jovial, social, ... 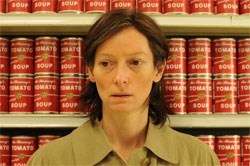