The U.S. Supreme Court upheld today the entire Patient Protection and Affordable Care Act (which some have termed Obamacare). In a case unprecedented in its scope, the court said Congress may require citizens to purchase health insurance because it is a form of taxation. Most evangelicals will likely be unhappy with the ruling, according to a recent survey.

In a 5-4 decision, the court said Congress acted within its power when it passed the law. Chief Justice John Roberts wrote for the majority that the health care mandate for individuals acted like a tax, not a requirement to purchase a product. Congress could not impose a mandate under its power to regulate commerce, but it could raise taxes on those who do not buy insurance.

Evangelicals, more than any other religious group, wanted the entire health care law scrapped, according to a June poll by the Pew Research Center for the People & the Press. In poll results given to Christianity Today, three-quarters of evangelicals disapprove of the law, a number higher than any other religious tradition. Catholics and those unaffiliated with religion were evenly split. African-American Protestants were the most supportive religious group, with 81 percent approving of the law.

Pew also asked respondents if they would be "happy" or "unhappy" with three possible Supreme Court scenarios. Overall, the court's ruling was unlikely to please many, regardless of the decision. About 50 percent of all Americans said they would be unhappy ... 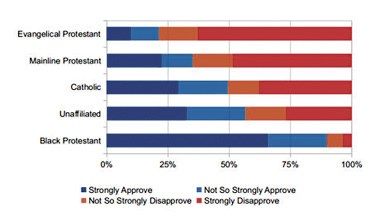