No one wanted the film. Except audiences, apparently.
Morgan Feddes|March 21, 2012

After finishing their first feature movie, October Baby, filmmaker brothers Jon and Andrew Erwin faced a problem: studios didn't want to take a chance on a flick about the "untouchable subject": Abortion.

October Baby is a fairly typical coming-of-age love story, but the plot hinges on the main character's discovery that she's an abortion survivor. (Jon Erwin wrote it after hearing abortion survivor Gianna Jessen speak.) Though studio executives loved the film, they didn't want to take on the controversial topic.

But the Erwins managed to raise enough support to do a limited release last October, and on its opening weekend it was the fourth-highest grossing film for per-screen average at almost $8,000 per theater. The positive reaction was enough to convince Provident Films and Samuel Goldwyn Films to help bring the movie to a wider audience—about 350 theaters when it releases on Friday, March 23.

The Erwins, known for their work on music videos (they've won three Dove Awards and were recently nominated for another), have been excited to see the impact the film is having. "Ultimately we do want to raise the value of human life," Andrew Erwin says. "But the people who've engaged the movie that have moved me most are those who have pulled us aside afterwards and said, 'Nobody knows this, but I had an abortion.'"

CT editorial resident Morgan Feddes recently spoke with the Erwins about their careers, their films, and their faith.

How did you become filmmakers?

Andrew Erwin: Jon and I started as kids. We worked at a youth camp in upstate New York where we made these little film shorts for the kids. You'll never find a more honest audience than 500 teenagers. Later we got into documentary, and one of them used a song by Michael ... 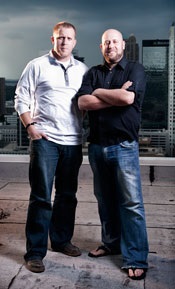