"Let's have some fun," says one god to another, suggesting that they "put on a show." The moment comes late in Wrath of the Titans. Very, very late. I don't remember the response, if any, but "Why start now?" would have been appropriate.

Writing about the 2010 Clash of the Titans remake, I complained that while the intrigues of the Greek gods ought to play like "Dallas" on Mount Olympus, in that film the gods seemed as grand and passionate as "The Simpsons." In a way it's worse in this sequel: Mount Olympus is never even seen, and the gods, irrelevant and losing their powers now that men have learned not to worship or pray to them, have become earthbound, or even Tartarus-bound.

Betrayed by Hades (Ralph Fiennes) and Ares (Édgar Ramírez), Zeus (Liam Neeson) spends nearly the whole film chained in a stygian pit with his remaining powers being drained away, which seems to amount to his arms very, very slowly turning into lava, or something. Perseus (Sam Worthington), the half-human son of Zeus, still wants nothing to do with his father; we're told Perseus refused to pray to Zeus even when Perseus's wife Io died between films—an odd turn of events, considering she was immortal. Actually, she was killed in the previous film, but Zeus brought her back to life in the end. What's the good of marrying an immortal woman if she keeps dying on you?

The good, I guess, is that Perseus still has his ten-year-old son Helius (John Bell), with whom he wants to be left in peace. Unfortunately, with the gods fading, their power is no longer sufficient to keep the demonic hordes of Tartarus imprisoned, imperiling all mankind—which Perseus ordinarily wouldn't care about, except that demon attacks are inconvenient to his ... 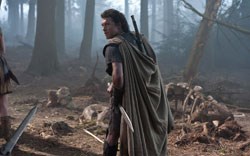