The ethereal Icelandic band may not intend it, but their music has a divinely spiritual vibe.
Joel Oliphint|May 29, 2012

If you're a Christian in America, you've likely heard of Sigur Rós. You might even know a superfan who will go on and on about the sheer beauty of this band's music. Though the members of Sigur Rós do not claim to be Christians, you may even hear the word "worship" pop up in a discussion with fellow believers.

This phenomenon is a bit baffling given that Sigur Rós is from Iceland, and its outspokenly gay bandleader Jón Þór Birgisson (Jónsi for short) sings in his native tongue. Well, usually. Sometimes he doesn't use language at all. Jónsi also sings in a form of gibberish that's been dubbed "Hopelandic." Nevertheless, search YouTube and you'll find a mashup of the Sigur Rós song "Inní Mér Syngur Vitleysingur" and Matt Redman's "Blessed Be Your Name" from Bill Hybels's Willow Creek Community Church. I can't say I'm a fan of this attempt, but the point is, once Sigur Rós has made it into a Willow Creek worship service, the band and its perceived worshipful qualities cannot be ignored.

Sigur Rós—named after Jónsi's little sister and directly translated "victory rose"—plays a version of post-rock, a subgenre that also encompasses bands such as Explosions in the Sky and Mogwai. Post-rock usually eschews a typical verse-chorus-verse structure and plays liberally with dynamics, glacially progressing from whispery to thunderous several times within a song. When vocals are used at all, it's less about lyrics and more about the texture and melody the voice adds to the overall mix.

On previous releases and new album Valtari, which releases today, Sigur Rós employs these tactics (and others) with a level of skill unmatched ... 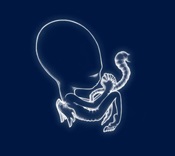