How long can a franchise lie fallow before it belongs to the past, and a sequel no longer persuades us that it's cut from the same cloth as earlier material? At what point does the urgency of "What happens next?" fade into the idle curiosity of "Where are they now?" The first of these questions is the natural subject of a sequel; the second though, is the territory of "sequels."

There is clearly a question of time, not just quality in this distinction. None of the Rocky or Raiders sequels are in the same league as the originals, but the two latter-day "sequels" are in a different category from the earlier ones. With such "sequels" we rightfully expect less. They are more like reunions than continuations. This influences me to go easier on such films.

Men in Black II came five years after the original (clearly within the sequel statute of limitations) which only made its ineptitude a worse disappointment. Now, a decade later, we have Men in Black 3. The very choice of an Arabic numeral 3, not a Roman numeral III, is a subtle disconnect that suggests the film as a "sequel," not a sequel. Ten years seems to be long enough.

Alas, ten minutes is long enough to establish that "where they are now" is not a very interesting place. Happily, the movie soon changes the question to "Where were they then?" and takes a turn for the better. With that said, it doesn't approach the witty and energetic original, and though it's better than the lousy MIB II, that's setting the bar low. Take it or leave it.

MIB 3 opens with a prison break involving a gratuitous bit of jiggle and giggle, some leering prison guards, a high body count and a formidable outlaw-biker type alien villain. Boris the Animal (Jemaine Clement of the comedy duo Flight of the ... 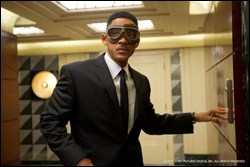