What could have been a stirring study of a conflicted woman of faith is marred by easy fixes and unevenness.
Todd Hertz|May 4, 2012
Our Rating

Devout wife and mother Eileen Cleary (Kathleen Turner) has been nominated for Catholic Woman of the Year. Consumed with appearances and accolades, Eileen would love to boast such a title. But more so, she craves the award's special bonus: a prayer of absolution pronounced by an archbishop.

But there's a problem. Eileen's long list of service and good deeds are not enough to win. The committee also evaluates the candidate's family. "Our choice has to be beyond reproach," says Eileen's monsignor. "But you shouldn't worry. You have a perfect family." Uh oh. In truth, Eileen's husband (Michael McGrady) is a recovering alcoholic. He daughter (Emily Dechanel) is a lesbian. And her son, (Jason Ritter) is leaving his wife for a mistress.

Eileen is divided between appearing to be the perfect Catholic and accepting her family in all their messiness.

This drama-comedy feels cut from the same cloth as 2004's Saved!, ABC's GCB and current film-fest indie The Wise Kids in its exploration of religion, sexuality, and judgment. Like those works, it is a Christian-learns-to-be-a-better-Christian-from-non-Christians story. It contains some well-deserved satire and truth, but will also divide audiences. Some in the church will be angered. Some will relate; feeling understood and vindicated. Some will be convicted. But I found it all declawed by poor filmmaking.

Director Anne Renton's first feature film feels hijacked by its agenda. Ironically, it seems to suffer from the same issue that often hurts Christian-made movies—a preachy lesson that overtakes story. In promoting love and acceptance over rules and condemnation, it can be over-the-top, predictable, and heavy-handed. Nothing is subtle, there's no nuance, the rhetoric is trite, and it ... 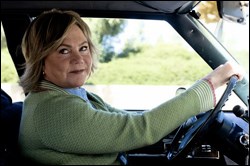