Two filmmakers go undercover to expose a cult leader who may or may not be from the future.
Kenneth R. MorefieldMay 18, 2012
Our Rating

Sound of My Voice has some creepy, effective showcase scenes that play well on trailers or clips, but lacks the development and coherence to make it an effective feature length film.

The movie begins en medias res, with a couple following cryptic instructions to enter a house, divest themselves of all tokens of personal identity, shower, put on hospital-like gowns, and submit to being blindfolded and bound as they are placed into a van with others to be taken to another location. Most of us have seen or read enough serial-killer thrillers to feel squeamish as the characters' vulnerability increases.

The fear we feel, however, isn't justified. Once we get past the initial of its mysterious opening, the film has a hard time sustaining the emotions of fear or dread, and it never manages to parlay them into an honest conviction that any of these characters are in real danger. Peter and Lorna are documentary filmmakers who are trying to get footage of Maggie, a mysterious woman living in a basement at an undisclosed location in "the valley." Maggie claims to be from the future, and she speaks cryptically about a coming disaster from which she will save her followers by taking them to a "safe" location.

Individual scenes mirror the structural problem of the film as whole, which is heavy on set up but light on dramatic or thematic payoff. In one centerpiece scene, Peter, who has swallowed an item he doesn't want anyone to see, tries to resist Maggie's attempts to get everyone in the room to vomit (in an object lesson about ingesting spiritual and literal poisons). The tension is real, but when the scene concludes with no real consequence, we feel cheated. The conclusion to that scene foreshadows the conclusion to the film as Maggie ... 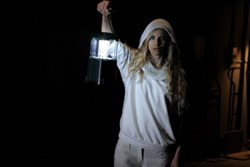