In a Lebanese village, Christian and Muslim women try various ploys to distract their men from fighting.
Frederica Mathewes-GreenMay 11, 2012
Our Rating

Outside a small, dusty village in Lebanon, a few teens with an old-fashioned boom box are climbing the hills, trying to find a place where they can get good reception; their home town is so isolated that news from the outside world is an occasional thing. Only a narrow, badly-maintained bridge connects them with the surrounding countryside, and it is surrounded by land mines that were planted long ago and never removed. Yet it's worth it to take that risk sometimes, if they can find a signal.

Suddenly there's a blast, and the kids immediately fall to the ground. It's not one of them, though; we don't see the victim until an old shepherd later comes through the village with his treasure draped over his shoulders. "Is that Brigitte?" asks Afaf, the widow who runs the village shop. Yes, Abu Ali sadly replies, "It's Brigitte, the one that never knew love."

At dusk a few hours later, the community is gathered on the hilltop, sitting in rows of chairs borrowed from the Catholic church and eagerly waiting to watch some TV. As the rotund mayor welcomes the crowd, he addresses Abu Ali in particular: "Brigitte did not die in vain. She sacrificed herself for us. Sacrificed her body! Any one of us here could have met the same fate. And remember, only the goat on the right is halal [permissible]." Brigitte the goat is turning on a spit, a nice toasty brown, and Abu Ali mutters to himself, tragically, "All I can say is bon appétit."

That gives you a taste of the wry humor you'll find in Where Do We Go Now?, an ensemble film in which an assortment of odd and interesting (and often very funny) characters, crammed together in an isolated town, try to find a way to get along without killing each other. Those words should be taken with ...

Join in on Facebook
Tags:
None
Posted:
May 11, 2012
More From: Frederica Mathewes-Green 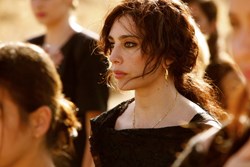