Jim Sonefeld's past is marred by alcoholism, but the former Hootie drummer is on the straight and narrow now.
Mark Moring|September 4, 2012

When Jim Sonefeld looks back on his days as drummer for Hootie & the Blowfish, it's very much a cracked rear view. The 1994 album of that title sold 25 million copies worldwide, making them incredibly rich young men who could have almost anything they wanted. And Sonefeld, a lapsed Catholic, wanted it all—girls, booze, drugs, just about anything you'd expect on a rock star's wish list.

Sonefeld struggled with alcoholism for about a decade, a time in which he fathered two children and, eventually, lost his first wife to divorce. But ultimately, at the urging of family and friends, he started attending 12-step meetings, gave up booze, remarried, and recommitted himself to God and family.

He recently decided to give Christian music a try; his debut project, an EP called Found, released earlier this year. We talked to Sonefeld about the new music, his wild ride with Hootie, his faith—and how his 4-year-old daughter helped him quit drinking.

You grew up in a Catholic home and went to Catholic school. Was your faith important in those years?

It was more of a cultural thing. I learned about Jesus and the church, but I was more interested in sports and other things. I wish I had been stronger, but when I went to college [at the University of South Carolina] one of the first things I left behind was my need to have a relationship with Jesus. I wanted to do good things and be a good citizen, but that was as far as it went.

While at South Carolina, you guys formed a band. Things were slow at first, but when Cracked Rear View released in 1994, you guys blew up. What was that like?

It messed with my head. My dream was to be a successful musician, so that was fine. But I didn't have a spiritual foundation, and it was only a matter ... 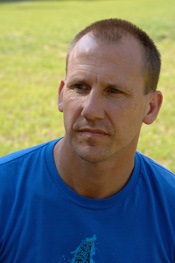