'Hellbound?,' seemingly bound to fail from the beginning, never takes a stand on the issue.
Mark Galli|September 19, 2012

You know a documentary about Christian faith is in trouble when it begins with film clips of and interviews with people from Westboro Baptist, the infamous hate-filled fundamentalist church in Topeka, Kansas.

Hellbound?, the directorial debut by Kevin Miller (a writer on Expelled: No Intelligence Allowed and the recent Kirk Cameron-hosted documentary, Monumental), opens with Westboro members protesting at the 10th anniversary 9/11 in New York City. They're carrying signs that say "God Hates Fags," "God's Wrath = 9/11," and so forth, with one protestor—apparently pastor Fred Phelps' daughter—spewing angry lines about 99.99999 percent of people on the planet going to hell.

This is the set-up for a documentary on hell. One can only sigh.

The foolishness does not end there. The documentary—now showing in limited theaters—returns to these protesters two more times in the short film, as if Westboro somehow represents a widespread point of view that needs to be refuted. While I admire the film's attempt to wade into a complex theological subject—hell and universalism—I was stunned by the carelessness evident throughout.

There was a near complete absence of professional theologians—and this in a documentary about theology. We hear from pastors, writers, speakers, and, yes, one biblical scholar (who doesn't believe in a literal hell, but only the hell we make for ourselves when we don't listen to God in our lives), and one conservative theologian who discusses something extraneous. Two cheers for including populist writers and speakers, because they do have a better way with words. And so we hear from people like Brian McClaren and Kevin DeYoung, William Young and Mark Driscoll. But while a lot of the talking heads talk lot about what the church has and hasn't taught through the centuries, not one church historian was interviewed.

We hear a lot about the place of hell in the Bible, but only one biblical scholar addresses the topic, and then from only one side of the debate. We hear lots of speculation about the place of hell in Christian doctrine, and not one systematic theologian addresses the topic. We hear much about the "fear" and the "controlling" nature of the institutional church (which is said to promote the doctrine of hell to protect its power), and not one sociologist of religion makes an appearance.

In juxtaposing Westboro Baptist protesters and an angry Mark Driscoll with calm universalists, the film suggests that those who believe in hell as conscious eternal torment are basically tormented themselves: fearful and judgmental. It never seems to have occurred to the filmmaker that there are thoughtful, careful, irenic evangelicals who believe in hell and may have some pretty strong reasons for doing so.

Given such problems and many more (which space precludes exploring), a viewer begins to wonder what the film is really about. This is my take: First, the film condemns the self-righteousness of many conservative Christians. While I heartily cheer that effort, I'm afraid it does this so well that as we mentally condemn the boorishness of these people, it tempts viewers into their own self-righteousness.

Second, the film wants to promote a vision of God that is loving and gracious. Again, I can only applaud this effort, though not the execution. Why? Because the film ends up committing the same mistake that fundamentalists make: smoothing out the mystery of God. 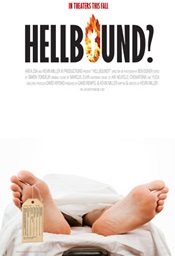 In fact, the Bible gives us a picture of a God who is almighty and vulnerable, Lord and friend, judge and gracious, hater of sin and forgiver of sin. We see this especially in the life and ministry of Jesus, God incarnate. He graciously accepts the woman caught in adultery, and violently drives blasphemers out of the Temple area, with a whip no less. He calls to himself all those who are weary and heavy laden, promising rest, and tells others that if they follow him, it will mean nothing but suffering and death. He lifts up an inspiring vision of the kingdom of heaven while warning people about the curse of hell.

This God of rough edges will not be smoothed out, neither by the fundamentalists who think he is mainly interested in populating hell, nor the liberals who imagine hell is empty. But the Bible will not allow us to put God in a box, even if the box is prettily decorated with the bright colors of grace. On this side of the kingdom, some paradoxes will never be resolved, some mysteries never unraveled. We have the courage to live in the mystery, because we've been gifted with faith to trust that, in the end, all things work together for good, that God's justice is more just than we can imagine, and his mercy more wonderful still.

Mark Galli is senior managing editor of Christianity Today. He is the author of Jesus Mean and Wild (Baker) and God Wins (Tyndale).