Last month, some 15,000 fans gathered in a small Illinois town, surrounded by miles of cornfields, for what was ostensibly a day-long music festival. But most of us who had come to Dixon, Illinois, for the third stop in the American Gentlemen of the Road tour weren't there for the seven bands who whiled away the day. We were there for the headliners: the prodigious folk quartet known as Mumford & Sons.

After nearly six hours of musical performances, the time had come. The sun was set, the stage was black. Streams of tiny light bulbs were strung over the lawn, from the sound booth to the stage. But like the audience, they had yet to be electrified by the impending performance. At once, people could be seen on stage, and with the sound of a syncopated acoustic guitar, the crowd erupted in cheer as they recognized the opening chords to "Little Lion Man." The roar of the crowd colliding with the music put me more at the scene of a victory celebration after battle than a folk festival.

Mumford & Sons have a fresh and distinctive sound. The rousing combination of traditional folk instrumentation, militaristic drum patterns, grandiose brass, and aggressive vocal tracks give their tunes an arresting and joyful sound. But their sonic creativity alone is not what has captured ... 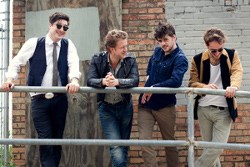