A recent teachers strike in Chicago—shutting down schools for two weeks—was accompanied by biting, often-personal rhetoric that spilled across the country via national press coverage. Classes are now in session as the union and administration dot the i's and cross the t's on a compromise contract. If ever there were a time for a movie about the promise of education to put a soothing and inspirational salve on angry wounds, now is that time.

Give us a Stand and Deliver, Lean on Me, Dead Poets Society, or even Dangerous Minds. Unfortunately, Won't Back Down is no salve and will only soothe those who are happy to lay all of our educational system's woes at the feet of teachers and their unions. And it's stirring up controversy with critics—film critics as well as educational experts—who say it oversimplifies a complex problem while pushing an agenda of its own. (More on that later in this review.)

Won't Back Down opens with the camera tight on the face of Malia Fitzpatrick, a young, blonde, blue-eyed school girl struggling to read words on the chalkboard. She's panicking as her classmates jeer and as the teacher, clearly annoyed as she looks up from texting on her cell phone, watches the student struggle. A wider shot of the teacher at her desk includes a computer screen with a shoe shopping website loaded. Malia eventually gives up trying to read the sentence. "I can't," she says and hangs her head. And so begins this modern fairy tale that comes complete with a princess in distress (Malia), dragons (Malia's teacher, the teacher's union, and administration), and a knight in shining armor (Mom).

Jamie Fitzpatrick, Malia's mom, is played with wild-eyed optimism by Maggie Gyllenhaal. Jamie is a low-income, ... 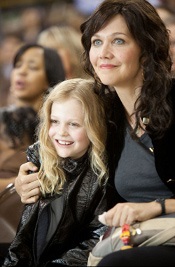