Let's start with what Closed Circuit is not.

You may have seen the film's carefully crafted (but spoiler-filled) trailer and its "THEY SEE YOUR EVERY MOVE" poster. And so you might expect it to be an examination of the psychological and sociological effects of living in a surveillance society. It's not. If you want to revisit The Conversation, The Lives of Others, or The Unbearable Lightness of Being, head to the video store this weekend, not the multiplex.

And it's not a ripped-from-the-headlines political debate about how valid or effective it is for governments to hold secret trials and use intelligence agencies to police their own citizens while trying to curb domestic terrorism threats. It's trying to be that—but ultimately all its political machinations are a setting for a rote legal mystery/thriller, not a fresh twist.

Eric Bana and Rebecca Hall play a pair or former lovers who, in a coincidence suspicious to even themselves, are both appointed to defend the man accused of masterminding a terrorist bombing in London. Because of national security concerns, some of the evidence must be presented in a private, sealed court. Claudia Simmons-Howe (Hall) must represent the defendant in the closed sessions. Martin Rose (Bana) is the barrister for the public parts of the trial. They take an oath to have no contact with one another, nor to collude in any way.

The film's biggest weakness is the way it stacks the deck by making one side of the political arguments into self-aware perpetrators of evil. Even those who share the film's core political convictions (and I do) can't help but be put off by how those who represent the government and its practices are portrayed ... 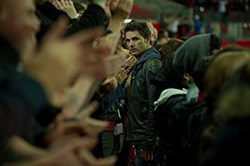