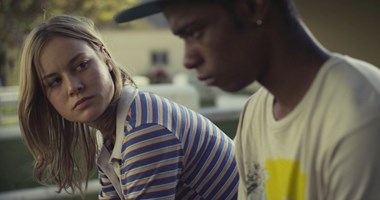 The film tells the deeply affecting story of Grace (The Spectacular Now's Brie Larson), supervisor at a foster care group home for troubled teenagers, as she navigates both their difficulties and her own, especially her relationship with her coworker and boyfriend, Mason (John Gallagher Jr., from The Newsroom). The teenagers in the home are reeling from a variety of the worst sorts of problems: sexual and emotional abuse, criminal pasts, deaths in the family, abandonment. They live in the home until they are 18, and Grace and Mason and their coworkers are there to keep peace and show them some love and normality.

Throughout their days, the home operates like a little family. They play wiffle ball. They get in fistfights. They brush their teeth and do their chores and celebrate birthdays with homemade cupcakes. The staff are barely older than the residents, but for the teenagers, that's all the stability they'll know.

But as we get to know Grace, Mason, and the others, we start to understand that they are there for deeply personal reasons. And they're becoming adults right along with their charges, trying to navigate their own troubled backgrounds and give these kids a shot at normality, too.

The film picks up as Grace begins to edge toward her breaking point for a variety of reasons, especially because a girl named Jayden shows up in the home. Jayden reminds Grace of herself, and so she starts to bump into old stories and emotions that she'd locked away in order to cope with her life.

That sounds like a bummer of a film, and I'll admit that I wasn't too excited to go to my screening (yes, I felt guilty about that fact). But I was moved to tears, because what Cretton has created is a small world in which love, law, and brokenness operate freely. The government's social systems are a quagmire for any filmmaker to wander into, but instead of critiquing the system, Short Term 12 does something interesting.

Without spoiling anything, Grace runs into a situation where obeying the laws that govern her job means that one of the kids might be put in harm's way. But in following foster care laws, you can't act on a hunch, something her boss makes clear to her in a surprising speech that both affirms Grace's desire to help and confirms both the problems inherent in and the goodness of a system governed by rules.

This is surprising, because the normal rules of moviemaking often dictate that either the law is good or working outside the law is good. (Often the latter wins out: see many of the vigilante films and television shows out there.) To point out a problem in the law, then, can amount to suggesting the whole system is corrupt and ought to be abolished. And sure, sometimes the law is in conflict with what is good, and people must disobey man's law in order to obey a higher one.

But it's especially unusual to see both a critique and an affirmation of a broken but necessary system in a film like this. The law and the system has its limits, but mercy is sometimes enacted, not only through the larger machinations or heroic acts enacted by saviors in batsuits, but in the small, quotidian sacrifices of individuals with their own crippling problems. In the case of the foster care system, the goal—though it can be met imperfectly—is to protect the weak, to give them a safer place to reach maturity. It exists explicitly because the world is populated by sinners who prey on the weakest. To be sure, the system is sustained by sinners, too. But grace breaks through, because God uses imperfect systems populated by imperfect people to do good work in the world.

Perhaps the choice to name the central character "Grace" was unintentional, but that seems unlikely: Grace is the bearer of grace to the home's residents, but she's also desperately in need of grace herself. That's something she's unwilling to accept, even from Mason, her boyfriend (who is one of the most carefully and lovingly written on-screen boyfriends I've seen in a while). But grace balances law.

In the end, though, these points about grace and law are not the point of the film, nor do they dominate. Short Term 12 is mostly just a movie about some teenagers and the twentysomethings who take care of them. It's both dramatic and light-hearted. It's difficult and heartwrenching, but also funny and well-directed. Cretton deserves high praise for his accomplishment. And I suppose, in some small way, that's grace breaking through the movie-making system, too.

Short Term 12 receives its R rating largely from its language—these are teenagers in a foster care home, they're hardly squeaky-clean—but little of it is gratuitous. However, nearly every character in the film is emotionally disturbed for difficult reasons; this is treated respectfully and carefully, but may be hard for more sensitive viewers. Additionally, cutting is part of the way two characters have coped with emotional difficulty, and we see scars, something that may prove to be a trigger for some viewers. One character contemplates an abortion. Two characters, unmarried but living together, begin to have sex, but it's cut short and we see nothing. One character speaks of male genitalia in a crude manner. A character tells a crude story involving bodily functions at the beginning of the film.

Alissa Wilkinson is Christianity Today's chief film critic and assistant professor of English and humanities at The King's College in New York City. You can find her on Twitter at @CT_Movies and @alissamarie.