A natural disaster occurs nearly every day somewhere on planet earth. On average each year, there are 3 million earthquakes, 85 hurricanes, and 60 volcano eruptions worldwide, and in the US, 1,000 tornadoes occur. From 2001 to 2011, 7 million people died in natural disasters.

Due to its location and geography, Japan has a high rate of earthquakes, typhoons, and other natural disasters. Several years ago, Jonathan Wilson, a missionary pastor in Tokyo, launched CRASH Japan (Christian Relief Assistance Support Hope). The goals of the organization are to train and mobilize Christian volunteers to provide "help and hope" before and after a natural disaster. Wilson spoke recently with Christianity Today senior editor for global journalism, Tim Morgan.

You started CRASH Japan in 2005. Why create another disaster relief organization when so many already exist?

When I got here 25 years ago, there was a bubble economy. The Japanese had medicine. They had technology. They had education. The only thing they actually needed from me was English. But I didn't go to Japan to be an English teacher. I went there to spread the gospel.

When the Kobe earthquake hit 1995, it was a huge event—6,500 people died. Everybody tried to do something, but it really wasn't enough. We did learn that in times of disasters that needs are most prevalent.

In 2007, there was an earthquake in Niigata on the seaside coast. Suddenly mass amounts of people headed to evacuation shelters. I said, "This is getting ugly." Nobody had a clue what to do. I ended up in a truck with a guy from Second Harvest Japan and another guy from YWAM, and they all said, "Yeah, we don't know who's doing anything, but we want to ... 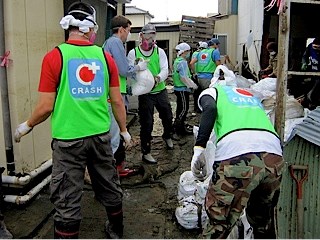