The summer movie season is here, and here come the big guns, starting with Michael's Bay's Pain & Gain and the third installment in the Iron Man series. (It could also be the last in the series, but who really knows?)

Both films are about various types of power: physical prowess, the ability to outsmart, the sway of the past over the present, an idea. And how they're made reflects that theme, too—from cinematography to editing to music and special effects (as demanded by blockbuster season). The results are, unfortunately, uneven.

Pain & Gain is, well, an unpleasant movie. Coarse and grisly, it's also instructive in the most bald and trite way. It preaches that crime doesn't pay—but we know that already. It tries to say something about our wealth-obsessed culture, but fumbles the ball.

Three bodybuilders are under the spell of the American dream, or at least a form of it. They believe that strength and hard work should almost by default lead to success—of the primarily financial variety.

Yet they're all weak in their own ways. Daniel Lugo (Wahlberg) is a trainer at a Florida gym who has also served time in the past for fraud. Adrian Doorbal (Mackie) is a customer who needs money to treat his steroid-induced impotence. And Paul Doyle (Johnson), fresh out of prison and a new convert to Christianity, is also a recovering coke addict and unable to stand up against the threat that guys like Lugo and Doorbal pose to his newfound faith and freedom.

As the supposed brains of the outfit, Lugo proposes that they kidnap a wealthy target and convince him to sign over his wealth. No one will get hurt, he promises Doyle. He knows what to do—he's seen it a million times ... 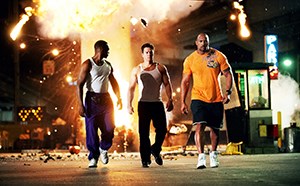